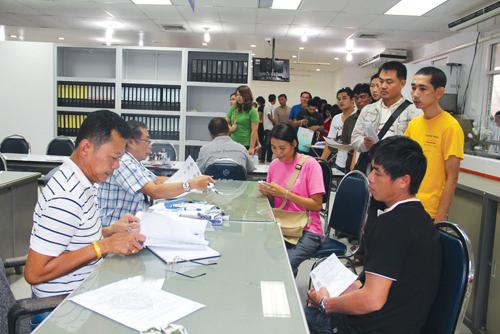 PHUKET: More than 14,300 new car owners in Phuket took advantage of the government’s first-car rebate scheme, with the combined value of due rebates amounting to more than 1.2 billion baht.

Of all the new cars and trucks bought in Phuket during the eligible period, a total of 5,745 were classified as vehicles that had been reserved and due to be delivered to respective car owners in 2013.

Rebates for this category are valued at just over 500 million baht, which equates to an average rebate of roughly 87,000 baht.

As per conditions of the policy, the car owners will be entitled to their rebate after possessing the vehicle for one year, counting from the day the vehicle is delivered to owner.

Wipada Daroonpong, PED policy specialist, said that as of the beginning of 2013, 523 rebates have already been paid out in Phuket.

Nationwide, the number of rebates paid out was 31,064, with a combined worth of more than 2.3 billion baht, she noted.

And though the PED was overwhelmed with rebate applications, as reported in the Phuket Gazette last month, the province was far from being the busiest.

Not including Bangkok, the province with the most applications processed was Chiang Mai, which reported processing a total 39,763 applications.

This was followed by Nakhon Ratchasima and Nonthaburi with 38,885 and 33,386 applications, respectively.

Rebates for these cars are estimated to be worth more than 90 billion baht – three times the initial target set when the policy was first implemented.

Rebates for these cars are estimated to be worth more than 90bn baht – three times the initial target set when the policy was first implemented.

According to a recent report by Kom Chad Luek, the number of rebates paid out nationwide so far, was about 47,000, which had a combined worth of more than 3.4bn baht.

The report estimated that in 2013, a total budget of 20bn baht will be needed to pay out due rebates, pointing out that the initial annual budget estimate in the government’s plan was 7bn baht.

Upon surging demand, the projected budget was later adjusted to 18bn baht, which is still not expected to be enough.

As for the 2014 budget, an additional budget of 30 to 35bn baht will be needed to pay out rebates, in which case, money allocated for the 2015 budget will have to be used to compensate.