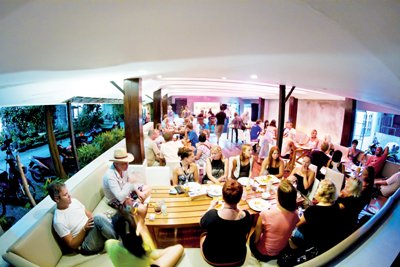 PHUKET: If anyone ever asked you, “Fancy a Flatty at Skiffer?” you would be forgiven for not knowing what they meant but after one visit to the trendy Skiffer restaurant in Chalong Bay you would likely answer in the affirmative as flatties are delicious.

Having lived in Phuket for years I must have passed near this place hundreds of times without even knowing of its existence, as it is literally off the beaten track, being situated in a very narrow soi that leads to a dead end.

Although the restaurant has only been open a year, the Scandi-(ly dressed) community would already be familiar with that track because of the Ao Chalong Thai herbal sauna situated just behind the restaurant.

Originally the eatery was designed to provide food for hungry divers and sailors who used the services of the Raya Group, who are long established in the area. From its humble beginnings as a convenient nearby kitchen, it has grown to combine dining, great drinks and ultimate comfort, and has become the third Skiffer in the world, the other two being in Finland.

“Skiffer” is a Swedish word for a large flat rock and the Fennoscandia links and flat references don’t stop there. The four owners have combined typical Scandinavian modern design with traditional maritime elements and a house specialty which they call a “Flatty”.

A Flatty is a large gourmet pizza with a distinctive oblong shape and luxurious toppings. All the organic ingredients are “carefully chosen from local vendors, fresh from the garden and straight from the fisherman’s daily catch.” Another difference from its pizza cousin is the lighter thin and crispy dough which was perfected after intensive training from a Finnish Skiffer’s chef who flew over to teach the local team how it is done back home.

As for the gourmet toppings, they included goat’s cheese, strawberries, rocket salad and cashew nuts on our first flatty named the Flatty Soignon (360 baht). Although an unusual combination of ingredients, it was absolutely delicious.

Next up was a “Flatty Seafood” garnished with smoked salmon, vendace (a freshwater whitefish imported from Finland) and green asparagus (360 baht). And for meat lovers there is the “Flatty Meat Lover” with cooked ham, Parma ham, onion and mature Emmental, or the “Flatty Mama’s Meatballs with giant meat balls, mature Emmental and pickled cucumber.(340 baht each).

Luckily for us, we had arrived on a Thursday which, during the high season, is the day the chef makes one surprise Scandinavian specialty voted for on Facebook. This week it was Lohikeitto (a creamy salmon, potato and leek soup at 200 baht) – sublime.

In addition to delectable Flatties there are also delicious salads as main courses (190 baht), as well as a comprehensive Thai menu which we did not try. But it looked reasonably priced, as were the drinks.

As in most Chalong area restaurants, the atmosphere at Phuket’s Skiffer was very laid-back with soft reggae music and many friendly Scandinavians drifting in after the herbal sauna located conveniently next door. We are told this is a common indulgence before sitting down to an appetizing dinner and we’ll try it next time. There will be a next time.

Skiffer, a thoroughly enjoyable experience from starters to Finnish.

To get to Skiffer, take the road from Chalong circle toward the pier. After 200 meters you will see the Skiffer sign on the right. Turn into a little soi and approximately 100 meters later you are there. Car parking is available along the road and at the cul de sac next to the sauna. They are closed on Mondays. More information is available on the website www.skiffer.fi/chalong