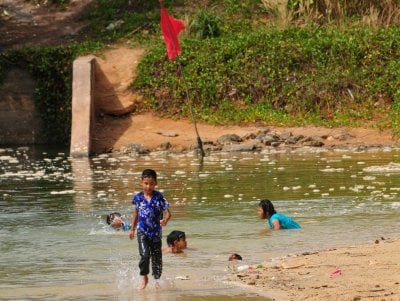 PHUKET: The drowning death of another child at Nai Harn Lagoon in Phuket over the weekend is causing authorities to consider closing the popular recreational area to swimming.

The latest victim, six-year-old Supathanwa Choophuek, was reportedly alive when Nai Harn Beach lifeguards pulled him from the water on Sunday, but he died later at Vachira Phuket Hospital.

Nai Harn lifeguard chief Samart Chandee, who was in Krabi at the time of the incident, said “On my return today I was told by staff that a boy was pulled from the water in the same place that Methee drowned on December 31 last year.”

“After the death of Methee, Rawai Municipality announced plans to put up warning signs around the lagoon to prevent further accidents,” he said.

“I am going to talk to Rawai Municipality administration officers to check on the progress,” he added.

Following the second fatality in such a short time, chief Samart will ask the Phuket Provincial Administration Organization (OrBorJor) for extra funding to provide four more life guard stations, one of which would be sited at the lagoon.

Such a move would not necessarily mean the lagoon would be off-limits to swimmers, however, Chief Samat said.

“I understand the area is beautiful and villagers like to promote it for picnicking, but children who can’t swim must be supervised by parents at all times. They should never be left alone, as in past cases,” he said.

Chief Samat said there had been a recent near-drowning case in which a mother left her nine-year-old child to look after a one-year-old while she and the eldest daughter went to buy food. Fortunately, quick action by a foreign woman saved the child’s life.

“This is irresponsible. Parents must be with children in the water. If you have to go somewhere you must take them with you.” he said

“They assume that that the water is only waist deep, but in only one step it becomes chest height and in two it’s over their heads,” he said.

“The lifeguards are doing their best to prevent further accidents, I asked our workers to pick up sharp items from under the water and to remove sharp shells from the rocks.” he said.

In light of this most recent tragedy, Chief Samat admitted he is seriously considering closing the lagoon to all swimmers.

However that might be a difficult rule to implement and enforce, he admitted.

“I do not think villagers will accept a no swimming order because they make a living selling food here,” he said.

“If so, there would not be much I could do,” he added.