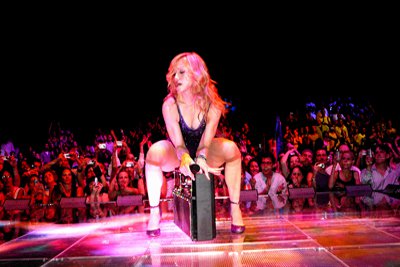 PHUKET (News Wires): Twitter users posted more than 12,000 tweets per second during the last moments of the Super Bowl XLVI on Sunday, the company said yesterday. It is one of the highest ever recorded.

Twitter said the highest number of tweets per second was recorded at the end of the game, during the last three minutes, when 12,233 tweets were posted within one second. But an earlier performance by Madonna during the halftime show also set records.

“Madonna’s performance saw an average of 8,000 Tweets per second for five minutes,” Twitter said on its website. It said it recorded a peak of 10,245 tweets in one second during the performance, the second-highest number of the night.

The 12,233 tweets per second is a new record for sports-related events, and significantly higher than the 4,064 tweets per second during the Super Bowl XLV in 2011. The previous record for a sporting event was the 7,196 per second when Japan equalized with three minutes of extra-time remaining and went on to win the Women’s World Cup final in Frankfurt in July 2011.

But while Sunday’s record is higher than the number of tweets per second during news events such as Steve Jobs’ death (6,049 tweets), Bin Laden’s death (5,106), the Royal Wedding in England (3,966 tweets), and the Japanese earthquake and tsunami in March 2011 (5,530 tweets), the premiere of the Japanese movie “Castles In The Sky” retains the all-time record.

According to Twitter, the television screening in Japan of the Hayao Miyazaki movie led to 25,088 tweets per second at its peak. The company says its users post approximately 250 million messages a day on average, or about 2,900 per second.

Victory for New York Giants and Madonna
PHUKET (News Wires): The battle between the champions of US football’s two leagues was a rematch from 2008 when the Giants, led by superstar quarterback Eli Manning, beat the Patriots, led by quarterback Tom Brady.

Brady and Manning faced off again, but the Giants, who came back from a mid-season slump to claim their league’s championship, scored a late fourth-quarter goal to win the game.

Some 173 million Americans were expected to have tuned in for the sporting spectacle. The iconic event generated almost as much excitement as the game, with new ads screened during the four-hour broadcast, not to mention the crowd-pleasing half-time show by pop diva Madonna, which she used to promote her latest album MDNA.

The Super Bowl is a barometer of the state of the US economy, with overall spending estimated at a record US21bn, with 5.1 million Americans estimated to have bought new flat screen TVs for the occasion – up from 4.5 million last year, according to the National Retail Federation.

Super Bowl TV viewers were expected to spend an average of 63.87 dollars each on apparel, merchandise and snacks, up from 59.33 dollars last year.

The game took place in Indianapolis, Indiana, against the backdrop of a bitter struggle over union-busting within the state.

The National Football League’s (NFL) Players Association got involved in the local politics that made Indiana the 23rd “right-to-work” state in the US.

The Republican-dominated legislature adopted a law that exempts non-union employees from paying dues even when working alongside their unionized colleagues, prompting the football player’s union to declare its solidarity with “the folks who believe in collectivized action.”

Advertisers shelled out at least US$3.5mn for each 30-second spot during the Super Bowl, one of the priciest ad slots ever on US television.

The Pepsi ad Sunday night featured a winner of the “X Factor” television song contest show, Melanie Amaro, dressed in medieval costume and singing her plea for Pepsi to be given to everyone.

The object of her appeal, the king, was played by Elton John in an exaggerated royal costume. He hoards the drink from his subjects until Amaro pulls a lever that sends him to the dungeon.

Pop diva Madonna, known for her daring nudity and sexual innuendo, wowed the crowd with a half-time show that had her adding, instead of removing, a layer of clothing.

Before the performance, Madonna was a bit anxious.

“Oh my god, I’m so nervous. You have no idea,” the superstar told CNN in a pre-Super Bowl interview. “I have eight minutes to set it up and seven minutes to take it down. I have 12 minutes to put on the greatest show on Earth. Okay, that’s a lot of pressure.”

Five killer whales sue SeaWorld
PHUKET (News Wires): A US judge is considering a lawsuit by People for the Ethical Treatment of Animals’ (Peta) against SeaWorld.

It is reportedly the first time a US court has heard legal arguments over whether animals should enjoy the same constitutional protections as humans.

BBC quoted SeaWorld’s legal team as saying the case was a waste of time and resources.

The marine park’s lawyer, Theodore Shaw, told the court in San Diego: “Neither orcas nor any other animal were included in the ‘We the people’… when the Constitution was adopted.”

He said that if the case were successful, it could have implications not just on how other marine parks or zoos operate, but even on the police use of sniffer dogs to detect bombs and drugs.

Peta says the killer whales are treated like slaves for being forced to live in tanks and perform daily at the SeaWorld parks in California and Florida.

It is not considered likely that the whales will win their freedom, but campaigners said they were pleased the case even made it to a courtroom.

The lawsuit invokes the 13th Amendment to the constitution, which abolished “slavery or involuntary servitude” in the US.

Jeffrey Kerr, the lawyer representing the five whales, said: “For the first time in our nation’s history, a federal court heard arguments as to whether living, breathing, feeling beings have rights and can be enslaved simply because they happen to not have been born human.

Peta names the five wild-captured orca plaintiffs as Tilikum and Katina, at SeaWorld Orlando; and Kasatka, Corky, and Ulises, at SeaWorld San Diego.

It is not Tilikum’s first time in the media spotlight. He drowned his trainer before horrified spectators in February 2010, prompting a ban on the Florida park’s employees entering the water to perform tricks with the orcas.

The same whale has also been linked to two other deaths.