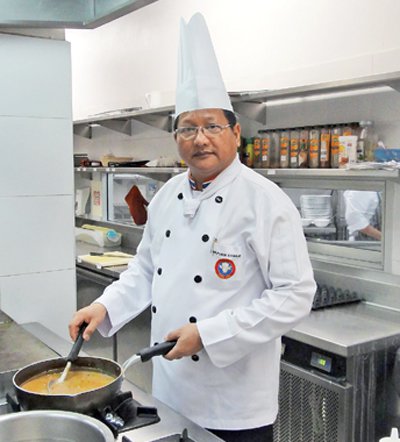 Chef Puwin’s career started at age 16 with no experience in cooking but plenty of passion.

“I always found the art of cooking fascinating. I was born and raised in a Chinese-Hainanese family, and cooking is what we are known for. I grew up seeing family members that were good at cooking and I wanted to carry on my family’s heritage,” said Chef Puwin.

“My passion for cooking led me to apply for a job at the Narai Hotel in Bangkok when I was 16 years old. Back then, in 1969, there were no cooking schools in Thailand. If you wanted to learn about cooking, you had to learn it from a big hotel,” he said.

“There were not many five-star hotels in Bangkok back then either, but the Narai was one of the few. I first worked as a trainee chef and learned much during my time there. I have to thank the executive chef at that time who give me such a valuable opportunity,” he added.

Chef Puwin worked in many departments of the hotel, gaining a lot of experience.

“From trainee chef, I was promoted to Coffee Cook with my main responsibility to prepare all the hot beverages for the coffee breaks for the conferences held at the hotel,” said Chef Puwin.

“After doing that for two years, I moved to the Cold Kitchen section, where I learned all about salads. I didn’t know much about vegetables and herbs from western countries because we only had local vegetables in the market. Carrots, beetroots and rosemary were things I had never even seen until I started working there,” he added.

“I worked for the Narai for 7 years and experienced all parts of the kitchen – cold, hot, and bakery – before moving to work in Pattaya. Then I was contracted to a hotel in Saudi Arabia. I decided to go because I wanted to experience another country,” he said.

After that one great door opened, there were many other paths available to Chef Puwin.

“I worked in Saudi Arabia for two years then returned to Bangkok before being contacted by a hotel in Japan. From Japan, I eventually came back to work in Thailand,” explained Chef Puwin.

“At this point I was a Sous Chef. I felt it was time for me to give something back, so I offered to teach cooking at some career training centers. I had so many experiences that I wanted to share with others interested in the culinary arts,” said Chef Puwin.

Although proud of all the things he has done in his life, there was one experience he will never forget. He was the first Thai Chef to prepare a meal for Michael Jackson. The hotel he worked for in Bangkok had a Chef Exchange Program, and he was in Malaysia when Michael Jackson held a world tour concert there.

Cooking may seem like just food preparation for some, but Chef Puwin sees it differently.

“For me, cooking is more like art. Being a chef back in 1970 taught me one important thing: we didn’t add MSG or other artificial ingredients back then. The food tasted good because we added one special ingredient: heart,” says Chef Puwin.

“It’s like eating the food my mother prepared. She prepared all the meals with heart, making sure everything she added was good and healthy. I feel the same way when I prepare food. Besides all the fresh ingredients and high quality products I use, I always make sure that I prepare every dish as if I were cooking for my own family. I guess you could call it ‘food from the heart’,” he explained.

“Hygienic, fresh ingredients are also another key to my cooking. My signature dish is fusion seafood. I have added the taste of Thai food and twisted it with some western ingredients. My salmon steak is the most exceptional dish,” he beams.