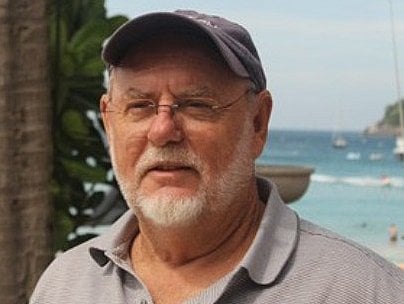 PHUKET: With race day four hosted by AIA Thailand and Centara Grand Beach Resort Phuket underway, we take a look at one of the personalities that has contributed to the success of the King’s Cup Regatta.

Three sailors hold the distinction of winning the racing division of the Phuket King’s Cup four times in its 25 year history.

These stalwarts of the event are Australian Ray Roberts and two New Zealand born sailors, Neil Pryde and Bill Gasson.

Gasson’s 42 foot yacht Buzzard was designed by Rob Humphreys and built in the Philippines. The CHS (now called IRC) racer-cruiser won the Phuket King’s Cup in 1989, 1990 and 1991.

Gasson subsequently commissioned a 50ft racer-cruiser from the same designer. Big Buzzard was built in Fremantle, Western Australia, and in 1996 Gasson sailed her to his fourth event win.

“In 1983, I looked at Royal Varuna Yacht Club, but it was very much a dinghy club back then, so I didn’t do a lot of sailing for a couple of years,” Gasson explains.

“In 1987, after I had been hauled on board as one of the founders of the King’s Cup, I scoured Phuket to find 13 Thai boats and had a few boats coming in from Malaysia, to actually get the regatta started,” he added.

“We had some top name sailors from around the world competing and one year I had eight sailors onboard Buzzard who had sailed in Whitbread Round the World races, some of them had even done two or three,” Gasson remembers.

“I won three regattas in a row. I had my old mates onboard, but I always had one or two guys who knew what they were doing,” said Gasson.

“The very first year of the regatta we probably had 10 or 12 different nationalities racing. Henry Kaye came down with a crew from the Hong Kong Yacht Club and they were, during those early years, the backbone of the fleet.”

“I was pretty involved in those early years, twelve years in racing or in race management, and then for another three or four years I would come and muck about until December 20.”

Gasson has kept busy over the last few years being involved in the formation of two new regattas, one in Koh Samui and the Top of the Gulf in Pattaya.

“2011 is the first time I have been back to the event in five years” said Gasson.

“In recent history the King’s Cup has been held over the King’s birthday, but this has not always been the case,” Gasson explained.

“For the first two years, we held the King’s Cup on a Friday, Saturday and Sunday. Then we added a race to Phi Phi Island with an overnight stop there and a race back to Nai Harn Beach. Within a few years that race was incorporated into the King’s Cup,” he said.

“The growing success of the regatta allowed the event to be extended to a week, and the King’s birthday fell within that time,” Gasson said.

“It has been interesting to look at the changes to the event. The format has changed little, the event management has become more professional and the quality of the fleet continues to improve,” he said.

“It’s good to see the King’s Cup providing more opportunities for the younger sailors with the Phuket Dinghy Series. The kids are the future and every event needs to expand its engagement with our potential young sailors,” Gasson concluded.

The Phuket Gazette and PGTV are proud sponsors of the 25th Phuket King’s Cup Regatta.

Are United’s modern glory days over?