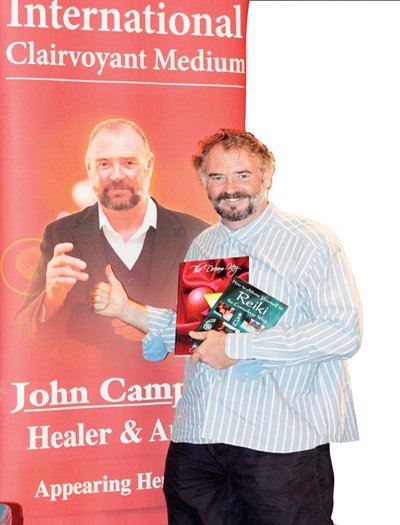 The bearded 49-year-old, once dubbed the “Hairy Healer”, towers at six-foot five inches yet he is softly spoken and exudes a calming tell-me-your-secrets aura.

He has always been a clairvoyant, as he believes everyone is on some level, but picked it up professionally 15 years ago. He’s been a Reiki healer for the past 9 years.

Hoping he can pass on some of his healing powers to Phuket people John has now made the island his home.

We wouldn’t bet against him. He is renowned for making people burst into tears – before he’s even uttered a word.

He said this mostly happened when he was performing clairvoyant shows in the Algarve, Portugul. And also by local men who were having relationship “issues”.

Author of two books – Attune yourself to Reiki and The Dream Key – John is also a sought after TV personality in Australia, his second home.

He is the first to admit he’s lived an unorthodox life.

He left Tyneside, England, in 1985 at age 22, working as an electrician in a shipyard, and bound for Australia in search of travel and adventure.

But after a horrific motorcycle accident left him with a crushed foot, doctors told John he would never walk again.

Hellbent on finding a way to help him walk, he turned his attention to alternative therapies.

“I lost my trade overnight. I couldn’t even climb a ladder anymore. It was a very sad time for me,” he said.

After being introduced to Reiki, John started to see improvements. After six years was back to full health.

His path set, he began his career as a clairvoyant and Reiki healer.

Today, about 70 per cent of his Reiki sessions are done online, but he also wants to teach in person in Phuket.

John is full of suprises. He’s an honorary Aboriginal elder in his former home city Adelaide. His healing powers have helped young offenders, cancer patients and a diverse range of people from many backgrounds all over the world.

He once “sensed” one of his female clients would come into a six figure sum of money.

A few weeks later he received a bizarre phone call from an anonymous and hysterical woman screaming down the line.

“I told her to calm down and phone back. She did, and it turned out it was my client. Her brother had just won £ 3.7 million on the lottery. He gave her half a million…she then started screaming again,” he said.

Let’s hope he can bring Phuket people such good fortune.