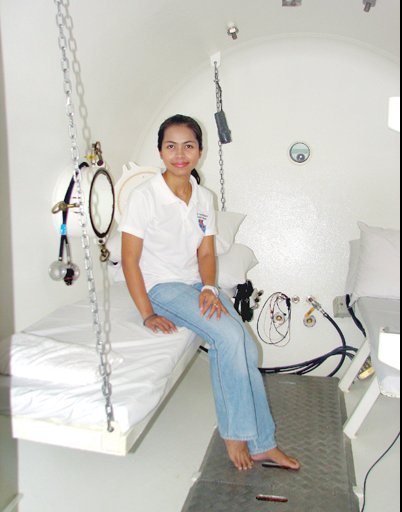 PHUKET: Though only some divers know all the words to the Twelve Days of Christmas, every diver has heard or knows by heart a couple horror stories of “getting the bends”.

From our training and bar room chat we get the the picture of a panicking diver disregarding protocol and bolting for the surface. As they shoot towards fresh air, the nitrogen accumulated in their tissue during the dive turns into rapidly expanding bubbles, possibly headed straight for the brain.

Those scenarios are extraordinarily rare, and though the exact causes of decompression illness (DCI), also known as “the bends”, and the formation of nitrogen bubbles isn’t completely understood, the cure, a treatment in a hyperbaric chamber, is right here in Phuket, but that’s really not the place to spend your holidays.

“It’s not so much [about] messing up,” said Patrick Schindler, Operations Co-coordinator for the hyperbaric chamber at Phuket International Hospital.

“People say, ‘You can’t be ‘bent’ you followed your computer, followed your tables; your dive was good.’ That doesn’t matter so much,” Patrick explained.

Each person is different and without researchers getting proper funding it’s not possible to fully understand why bubbles develop in some individuals and not others, or why some people who do develop bubbles have symptoms and some don’t.

Many dive professionals have only a superficial understanding of DCI, due to its rarity, yet they are expected to teach it to the members of the dive community. This is one of the reasons Patrick offers his time to educate them and the general public about DCI and hyperbaric chamber procedures. The next five day seminar will be held in either April or May.

The hyperbaric chamber at Phuket International Hospital is only one of four chambers in Phuket, serving the entire west coast of Thailand. What the white-WWII-submarine looking contraption, or more precisely, pressure vessel for human occupancy, does is increase the air pressure around a person while they breathe 100 per cent oxygen. This increases the amount of oxygen that can be absorbed by the body, which helps eliminate the nitrogen in the patient’s system.

Most DCI cases that are handled at the Phuket International Hospital are the less serious ones. Sometimes people show up a couple days after diving and have lost sensation in their pinky finger or are suffering from persistent joint pain, one of the many places bubbles can accumulate.

“Denial is the biggest issue for all illnesses. People just go back to whatever island they were on and come to Phuket the next day or even later,” Patrick said.

People make up excuses for skin rashes and many of the symptoms of DCI. They often explain the rashes as unnoticed encounters with jellyfish or a sudden allergic reaction to neoprene. Avoiding the obvious fact that the rashes have developed only on their abdomen or hips, which were covered by the wetsuit as well as other parts of their bodies and thus unlikely to come into contact with marine stingers.

Many of these symptoms of DCI can disappear in a couple of hours or over-night, often allowing divers to justify getting back in the water the next day, instead of following up on the issue by consulting the Sub-aquatic Safety Service (SSS) Re-compression Chamber Network or a doctor who fully understands DCI and its symptoms.

“The next day, feeling better they return to their holiday diving. First dive – okay, second dive – okay and then, bang! They get three times worse,” explained Patrick.

Despite being on a stunningly beautiful island for the holiday season and participating in an activity with a reasonable safety record, divers shouldn’t neglect to call the SSS Re-compression Chamber Network on +66 810 819000 if they have any concerns or show any signs of DCI.

Phuket Lifestyle: Feat of a dancer