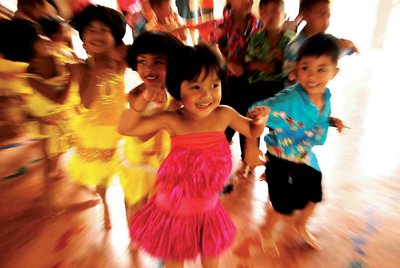 PHUKET: Internet sensation Matthew Harding recently visited Yaowawit School in Phang Nga to record a section for his new video which will feature the schoolchildren performing with “Dancing Matt”.

The filming and publicity are part of efforts to encourage donations for the school and to help promote the Tourism Authority of Thailand’s latest campaign “Go Thailand: All that is missing is you”.

Sabine Kraus, manager of Yaowawit School which is part of the Children’s World Academy Foundation, was asked if being part of Matt’s tour would benefit the school.

“We are, of course, interested in playing a role in this video because we can reach a lot of people globally who may be interested in our work or may want to visit or help financially,” said Sabine.

On Matt’s arrival at the school, he showed his two videos of dancing around the world to the children. The images clearly impressed the youngsters who inquired about how Matt danced in many unusual situations including the desert, under water, among throngs of people and even among jellyfish.

Matt was treated to a performance of Thai-folk dancing by the children who then taught him a few basic moves. Not easy – even for an experienced dancer.

After some practice, the children were ready to perform for the cameras, but with a bunch of kids enjoying themselves, eventually composure gave way to hilarity.

However, the recording was a success and Sabine was delighted with the day’s activities as a positive emotional development experience.

“That was a lot of fun. I had such a great time. All the kids have such great spirit and they are excellent dancers – not shy at all. Being taught the Thai-folk dancing completely exhausted me,” said Matt.

With 120 children who are parent-less or who come from poor families, the school aims to provide free primary education until the children reach high school.

“Monthly expenses are about 800,000 baht. Roughly half of this is covered by the Swiss Education group plus charitable donations and our own income from accommodation and farming – so we still have a big gap to fill,” Sabine said.

Those interested in donating to the school, can contact the project manager Sabine Kraus T: 082 2838 355 or E: sabkrs@gmail.com or visit the school site at childrensworldacademy.com.

See the children’s dancing with Matt in his latest video at wherethehellismatt.com.

Phuket Lifestyle: Christmas in the chamber