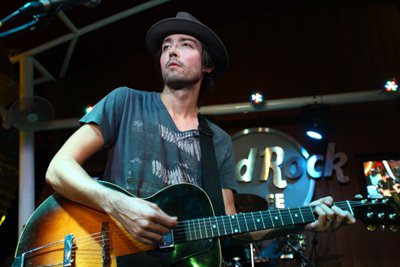 PHUKET: It’s Saturday night at the Hard Rock Cafe in Patong and a young man steps out onto the stage armed with his trademark stetson hat, a Gibson guitar, a new band and some sultry killer tracks from his first solo album. On March 24 Hugo was back home in Thailand and performing for the first time here since 2005.

Hugo Chakrabongse is totally bilingual, being from an aristocratic half Thai and half British background. A decade ago he was the frontman for the Thai band Siplor after having some success as a TV and film star before disappearing from the local media spotlight.

Fast forward to last year when, after joining Jay-Z’s Roc Nation, he released his first English language solo album titled Old Tyme Religion tracks of which have been featured on the David Letterman Show and several movies and TV commercials. Hugo has not only been able to make his name abroad, after the successful charity concert he donated his stetson hat and a signed guitar to the Hard Rock Cafe’s own hall of fame.

Phuket Gazette: Given your multicultural background can you describe the influences on your music?

Hugo: In a broad way I’ve always had a love affair with mid-twentieth-century American music. I think that’s a common theme among a lot of the older generation of British rock and pop stars who look to the music of that great crossroads of Memphis and that whole explosion and golden age of recorded and live electric music.

Also I’m influenced by the music of my parents’ generation; Bob Dylan, Leonard Cohen and Neil Young are a huge influence as I listened to them as a kid… and obviously the Beatles, who were masters of that kind of music.

Then later on the music of my generation; Michael Jackson and later Guns ‘n’ Roses and Nirvana. In my early teens I was really into Michael Jackson who was a great performer and a star – the only guy ever to really come close to Elvis in terms of impact. He has a certain transcendent quality. Only later as I became a musician did I start to trace the roots and structure of the music that I really liked and of course it led back to the Mississippi delta – the source of it all.

PG: It’s interesting that you talk of the Mississippi delta as you have a song on your album about the Mekong delta, do you find a similarity?

Hugo: Yeah, a swamp is a place where man’s mastery over nature is not complete, where there is a sense of foreboding but also beauty and heat and a slight feverishness that I can relate to.

Thailand is unique in that it has this link to America because of the Vietnam war. It had an impact on Thai culture – Thailand got an injection of American culture at an interesting time, the late sixties, that left a lasting legacy.

Thais are very outward looking and appropriate things from other cultures far more readily that maybe people from other Asian countries. The perfect example of this is the group Carabao and the golden age of Thai pop music in the early eighties where these musicians who had cut their teeth playing for westerners somehow got their influence from that dark time. From the swamp came something positive.

PG: When did you know that you had to be a musician and what sacrifices did you have to make?

Hugo: At the time it seemed there would be no sacrifices as it seemed the perfect profession for an 18 year old. I wanted to be in a band for the lifestyle and that’s how Siplor came to be. I suppose I had to make some career changes, as I already had a career in television here in Thailand and eventually it became unsustainable so I had to cut off the acting to focus on the music.

I was pretty opportunistic about it at the time but now I feel privileged to be a working musician.

The sacrifices I have to make now are about being away from my family and being on the road which is tiring in America. It’s very manual and involves a lot of driving and loading and unloading of equipment between gigs. Sometimes it’s more like a delivery job – you only play for half an hour and spend the other twenty three and a half hours driving and carrying things.

PG: So from being in Siplor you went to the UK?
Hugo: I was invited to work in UK by a songwriter named Amanda Ghost (Who wrote ‘You’re Beautiful’ for James Blunt) who had heard a cut I did on a charity album put together by Ad Carabao just after the 2004 tsunami. Because of the intricacies of the Thai language it was very difficult for me to write a topical song about the tsunami, in Thai and in the time frame given.

One of the musicians suggested I write it in English, which I had never considered, so that night I wrote ‘26.12.04.’ It was released and Amanda Ghost heard it and called me saying she wanted to do some writing with me. So I went to the UK , wrote a couple of songs with her and returned to complete the fourth Siplor record.

She must have played it to some people and a couple of months later a guy from Island records flew to Thailand and offered me the full Faustian contract – one of the last old school record contracts because this was before 2007 – when the music industry finally realized that the record business as they knew it was over.

I was quite grizzled at that point, about 26 or 27 and used to being in a band so I thought it would be good to have the pressure of working at that standard and to be alone and responsible for all the decisions I made without the comfort of the ‘group-think’ of being in a band where it’s about ‘being in the band’ rather than anything else.

When you’re in a band you have a certain freedom because you’ve got everything you need to make the sounds you want to make. When you’re a solo artist your life is more in the hands of other people, you need a budget as everything costs more, but of course once you are working at an international level the potential market for your music is bigger and there is more backing and you improve.

PG: From there you went to the USA. Do you think that a musician needs to break into that market to be a success?

Hugo: It depends on what your aspirations are. America is absolutely the single biggest market for English language three-minute-thirty second pop songs, because of its size and the number of big cities that are so large they could be individual countries in their right. You could have a small percentage in that state who are into your music and have work to do for the rest of your life. Because these people will not fly to see you or drive ten hours – you’ve got to go and play for them and I think touring is the only music business left.

PG: You had a lucky break with your first solo album ‘Old Tyme Religion’ and have now come back to Thailand for the first time since then – how does that feel?

Hugo: Yeah, it’s great. I feel like I’m coming home and it’s vindication of a few decisions I made, the first being to turn my back on a lot of stuff and do music and to leave my friends in the band.

If the whole enterprise had been a failure, which it nearly was when I was dropped from Island records in the UK, I think I would