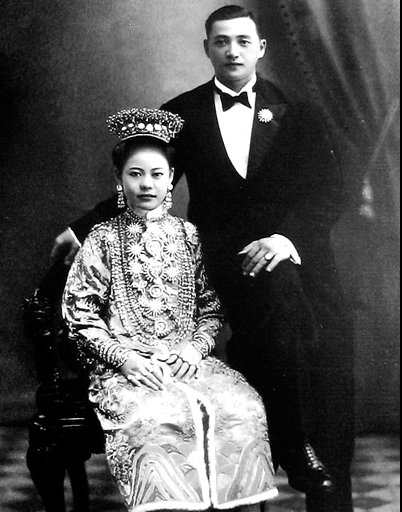 PHUKET: The Chinese community in Malaya grew rapidly during the 19th century.

Chinese immigrants were usually young unmarried men. Even if they were married, few would have brought their wives with them on such a long and difficult journey into a completely new world. Many were therefore not reluctant to take Malay, Sumatran or Javanese women as their wives or concubines once they had settled down.

Their descendants, who were ethnic mixes of Malay and Chinese, became known as “Nyonya-Baba”. The Nyonya-Baba soon became a separate group within the Chinese community in Malaya. The descendants of first generation Chinese settlers were mostly of Sino-Malay ethnic mixes.

The Sino-Malays who were born in Penang, Malacca and other cities on the peninsula in later years developed their own unique culture. They retained some of the Chinese traditions that had been passed down from their forefathers, but also adopted many aspects of Malay and Western culture.

The term “Baba” is derived from Hindi and is often used in Indian culture to address a respected elder or a wise person. Ethnic Chinese men who were born in the strait settlements during this time were often addressed as Baba, as a sign of respect.

Women on the other hand were addressed as “Nyonya”, a Malay term used to address non-Malay women of high social standing. The term “Nyonya” could be traced back to the Portuguese language, meaning “grandmother”. Whilst Baba men preferred to dress themselves in suits and western attire, the Nyonya ladies dressed in distinctly Malay clothes. Their home-cooked food was an interesting mix of English, Malay, Thai, Indian and Chinese cuisine.

Although English was the preferred language of education in the Nyonya-Baba community, the Nyonya-Baba of Penang spoke a strange mixture of Hokkien Chinese, English and Malay. Marriages were kept within the community and between those of equal socioeconomic status. After the marriage, the man would move in to live with his wife’s family.

Because of this it was not uncommon for wealthy families to seek promising young bachelors to marry their daughters, in order to increase the amount of “talent” in the family. The son-in-law would help support his new family by joining and working for the family business.

The earliest Nyonya-Baba community probably started in Malacca. In Malacca and Singapore, they are sometimes referred to as “Peranakan Cina”, or “local-born Chinese”. To be Nyonya-Baba, one had to be born in Malaya, Sumatra, Java or any of the strait settlements. However not every ethnic Chinese born in Malaya was a Nyonya-Baba unless they displayed certain characteristics. They dressed a certain way, spoke their own mix of languages and were typically educated in English.

Because of their inherited wealth and their English-medium education, most Nyonya-Baba families were economically better off than first generation Chinese immigrants.

Their fluency in English allowed them to work in the British civil service or as doctors and lawyers. Together with their family wealth and social connections, the Nyonya-Baba community rose to become the Chinese elite during their heyday.

The community in Penang started much later in the late 18th or early 19th century. The Nyonya-Baba people were coastal traders and businessmen. Many Baba men built their network of business interests in small ports and towns along the Thai-Malay Peninsula, all the way up to Rangoon.

From the 19th century onwards, Nyonya-Baba culture had become evident in Phuket as more and more Baba businessmen ventured into Phuket’s tin-mining industry.

Since the 19th century, Phuket became an important tin-mining center for Chinese businessmen in Penang. Soon many more Nyonya-Baba were settling in Phuket as the tin industry grew and more wealthy families started establishing their business headquarters on the island.

The Nyonya-Baba elite of Phuket strengthened their relationships with the Penang Nyonya-Baba community through marriage alliances. Well-bred Nyonya from Penang were highly sought after as daughters-in-law by wealthy families in Phuket. Marriage was a way of creating more wealth amongst the wealthy, therefore the rich usually married within their ranks.

During this period, although Phuket was part of Siam and Penang was an island within the British Empire, Phuket was more closely tied with Penang than with any other city in the region.

Phuket Lifestyle – an improvement on perfection?