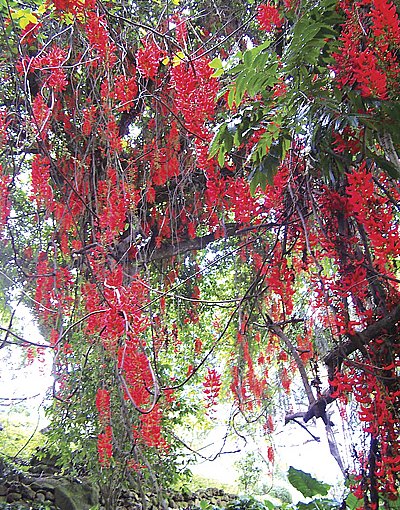 PHUKET: Today’s piece was intended to focus on shrubs, beautiful and not armored, but still unlikely to find a place in a garden frequented by children due to their poisonous qualities.

But, another small tree has temporarily upstaged them. I was on a trip around Phuket, and ended up, literally, in a small soi which, as they often do, terminated abruptly.

As I reversed out of the cul-de sac, my partner noticed a spectacular plant growing in someone’s front garden. It was a red jade (mucuna bennetti) about ten feet tall with the most spectacular racemes of scarlet flowers fully a foot long.

But what was odd was that the spikes were pointing straight up, unlike the pendulous posture they normally adopt, perhaps twenty or thirty beak-shaped, flowers on each raceme.

This plant is, moreover, normally a vine, but this specimen was a conventional tree with a gnarled trunk and an open crown. As a member of the leguminaceae family, it also had a number of ripe brown seed pods.

And here’s the point. My partner reached up, and pulled a couple from an overhanging branch, then promptly swore in Thai. The branches were armored with fierce spines, hardly visible, but offering a potent defense. A thorny reminder…

Switch back to England some years ago, and another cautionary tale. Lucky enough to have a good-sized London garden, I planted a row of castor-oil shrubs against a wall outside the back door.

Normally used as a house-plant, these flourished, and their beautiful palmate leaves shone as though newly varnished. They also produced clusters of dark purple berries.

One day, I found our Persian kitten lifeless on the paving stones nearby. How or why she died remains a mystery, but I subsequently learned that the castor-oil plant is, according to The Guinness Book of Records, the deadliest of all known plants. A few berries can kill. Thank God, my children never sampled them.

Though all parts of the castor-oil plant are toxic, it is always those with poisonous berries or fruits which pose the biggest threat.

Such plants may provide less obvious reminders of their power, but they are capable of inflicting far more than a bloodied finger.

Most of them are unpleasant to the taste, but alluring colors can be a magnet. And Thailand, which has a cornucopia of delicious and highly edible fruits and vegetables, also has more than its fair share of potentially dangerous plants.

The biggest family of toxic shrubs, is the apocynaceae brigade. Take the oleander, or to use its correct botanical name, the nerium.

Oleanders are popular because they are sturdy and drought-resistant, tolerant of poor soils, have attractive, narrow-leaved, leathery, evergreen foliage and can, according to the cultivar (and there are more than 400), bloom in a range from white to deep pink and cerise. But in my experience, it is an erratic bloomer, and besides, all parts are poisonous.

The milky sap can irritate the skin and there are even stories of families being hospitalized after inhaling the smoke from the burning branches.

The culprits are cardioactive glycosides which, as with so many ingredients in dodgy plants, can be medically beneficial in small quantities. For example, they are effective in treating some forms of cancer and some heart conditions.

The nerium oleander has nothing much in the way of berries, so it is unlikely to be ingested by children.

On the other hand, the equally popular yellow oleander (thevetia peruviana or ram phoei) has large, green, glossy drupes, which might attract the curious.

Personally, I find it more appealing than the nerium.

It is a much faster grower, and produces yellow or apricot, trumpet-shaped flowers with great consistency.

As they say in Thailand, “Up to you.”

Tip of the week – Pottering with palms
A recent query from a reader concerned the suitability of palms for containers.

Many varieties are simply too big to pot, but there are some exceptions.

Indeed, some are tolerant enough of indoor conditions to have been used as house-plants for many years.

The commonest patio palm to be found in containers is probably the golden cane palm (dypsis lutescens).

It grows vigorously in clumps, and can attain two meters in a suitably large pot.

In full sun, its feathery fronds will turn yellowish; in semi-shade, they will remain green.

The fishtail palm (caryota) has a single slender trunk; atypically, it has dark green, densely produced leaves, which give the tree its name.

Particularly useful in darker areas or as a screen, it needs plenty of water.