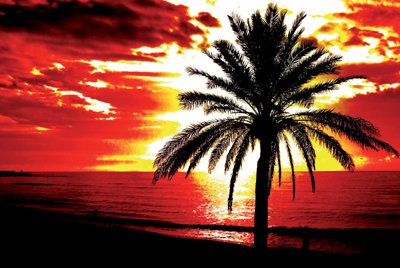 PHUKET: I recently came across a letter in which the writer lamented the absence of palms on Phuket’s beaches. Not like the Caribbean, he declared.

While this observation is more or less true, there are a few sprouting improbably from the sand dunes at secluded spots around the island. And anyway, there are plenty of alternative trees: avenues of casuarinas just yards away from beaches such as Nai Harn, and at the sea’s edge, screw pines and sea almonds to lend an exotic and verdant touch to the shimmering sands.

Of course, it is the coconut palm (cocos nucifera) which one normally associates with tropical paradises. But it not a good choice for your garden unless you want a specimen lawn tree or two, and unless you have oodles of space the mature fronds may be nine feet across. My local spa has several coconut palms, fully sixty feet tall. However, they were obviously already there when the spa was created, and the designer, conscious of how effective they look near swimming pools, sensibly made a feature of them, and surrounded the swollen base of each bole with a circular bed of colorful and ground-hugging flowers.

Where less lofty palms score over other small garden trees is in terms of their neat appearance, their ability to survive harsh conditions, and their distinctive aesthetic appeal. Silhouetted against a brilliant red sunset, they look superb. A tropical garden without palms is like a duck without water. And if you do want a coconut palm – useful and tasty as well as beautiful – you can always opt for a dwarf variety. The good thing is that they all contain sweet juice and delicious white flesh.

There are now dwarf cultivars which produce fruit when only three or four years old. However, the Malayan Dwarf and the New Guinea Dwarf are both something of a misnomer since they can attain thirty feet. Very much smaller and with a wide crown of leaflets is the Fiji Dwarf, a slow growing and wide-spreading variety, which, unlike most palms, provides dense shade. Another, Red Spicata, produces orange/red nuts. While the parent species produces a round crown of fronds at its lofty apex, many of these dwarf palms are characterized by a wedge-shaped arrangement of leaves.

Growing palms is a relatively straightforward business. Here in the tropics, cocos nucifera or ma-phrao, once established, enjoys full sun, but plant small specimens or sprouting coconuts in shade, and transfer them later to an open location. The root system is relatively small and since new roots form from the base of the trunk, even big trees can be successfully transplanted in the wet season.

One small palm which has received less than its due in these columns is the MacArthur palm.(mak khieo) It has slender stems which form a clump, somewhat like the better-known golden cane palm. The feather-shaped leaves, however, have blunt ends, as though they have been snipped by crimping scissors. This feature in no way detracts from the tree’s attractive appearance, for the leaves are not only glossy and dark green, but tend to discolor less as they age. Periodically, it produces panicles of flowers which are followed by masses of bead-like yellow fruits which turn brilliant red as they ripen.

The MacArthur palm prefers shade and will grow where there is little direct sun. Groups planted together can form an effective screen in a small garden. It can also be used as a potted specimen on terraces and patios. Preferring moist soil, it can, like most palms, be grown directly from seed.

Herbicides are classified according to what stage of weed growth they affect, as well as how they damage or destroy weeds. They are either synthetic or natural.

Pre-emergence herbicides work by inhibiting the growth of germinating seeds. They do not affect established plants, so they must be applied to the area before or immediately after the seeds sprout. So first remove existing weeds by hand if you are treating an area with flower beds or grass.

Note the chemical ingredient on the label and check to see how long the product remains active in the soil. Otherwise you may harm seeds sown later. Many pre-emergence herbicides are used to kill germinating seeds in lawns, especially invasive crabgrass, and are often used in combination with fertilizer. This increases the lawn’s vigor and its capacity to compete against weeds. Chemicals used include oryzalin, pendimethalin, prodiamine and clithiopyr.

Phuket Books: Searching to do the right thing