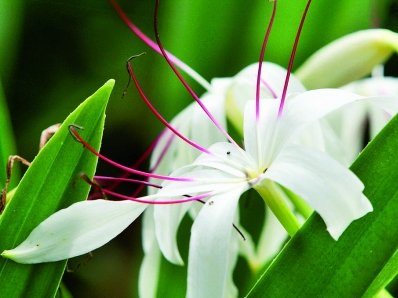 PHUKET: BOOKS on tropical gardening contain little information about types of lily. In fact, few ornamental varieties are mentioned. There is plenty about the allium branch of the family – onions, chives, garlic and the like – but little on flowering lilies.

The problem is that though they have been around for 4,000 years, the majority of lilies grow only in temperate or sub-tropical regions.

Indeed, most Asiatic hybrids or Oriental lilies, despite their names, exist here only as imports. These are especially prized as cut flowers destined for hotels and drawing rooms.

But there are varieties that can grace your Phuket garden. Take the spider lily (Hymenocallis littoralis) as an example.

It is used everywhere on the island as a bedding plant, usually planted in massed ranks to create a dramatic effect. The spider lily is ideal as ground cover, since it has attractive, strap-shaped leaves and distinctive star-shaped flowers with long spidery petals emerging from a white hub – hence the name spider lily.

It is a neat plant, unlikely to exceed two feet in height. Because of its popularity, it has spawned a number of cultivars, including a form with attractive variegated foliage, and another with much narrower leaves. The flowers tend to appear at the same time, and last quite awhile.

But perhaps the lily’s main selling point is its good nature. For it will tolerate a range of soils, and though it flowers most easily in sunny conditions, it will also put up with deep shade. Moreover it will, if left alone, multiply and provide an ever larger patch of blooms. It is an excellent starter flower for the new garden.

One lily-lookalike that flourishes outdoors in Thailand’s dry season is a variety of hippeastrum. No longer classified as a true lily, the hippeastrum belongs to the larger genus of amaryllidaceae that includes the lilies.

Right now, it is in flower around Phuket, a distinctive, single-stemmed plant crowned by four lily-like, trumpet-shaped flowers in an unusual shade of deep salmon pink. The blooms face to the four points of the compass – hence the colloquial Thai name translating as “facing four ways” or “compass plant”.

It grows about 18 inches tall, and looks particularly decorative when grouped as a border plant. Give it time and the bulbs will multiply unseen. A roadside bed near Nai Harn Lake is evidence of that.

Most other species of hippeastrum will struggle in Thailand’s heat. So it is usually sold here – as in Europe – as a massive bulb, which you then plant in a container with the top third projecting above the soil.

Give the bulb a rich potting mix, with a pH no higher than 6.5. A slow developer, it will, like its outdoor Thai cousin, take up to 10 months to flower, and will only do so once it has produced a least four, characteristic, strap-like leaves.

However, the results are truly spectacular – voluptuous, trumpet-shaped blooms at the top of thick, fleshy stems, and a range of colors from deep red through salmon pink to cream and white.

There are many striped and bi-colored forms, as befits a plant that has been extensively hybridized. And one stem may produce anything from two to a dozen blooms. But if you want your hippeastrum to flower again, you will need to put the bulb in cooler conditions for a few weeks before re-potting.

I am currently growing one in a container outdoors. Placed in a shaded area next to the house, it already has several leaves, so it should flower in due course – fingers crossed. But the real test will come if, and when, it is transferred permanently to a flower bed.

If you have a garden that you would like to be featured on this page, please email: pcampbell45@gmail.com