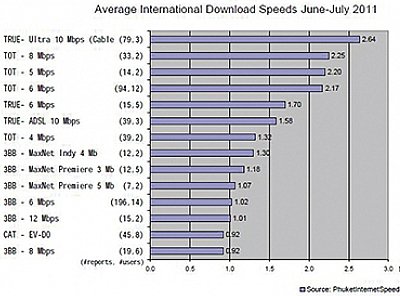 PHUKET: A little less than two months ago we changed the method for measuring internet speeds, as reported on PhuketInternetSpeed.com. Before that point, we were measuring international download speeds using a technique that was prone to caching – Internet Service Providers, using tools that are actually beneficial to customers like us, automatically bypassed the speed testing regimen. So we switched to a speed testing site that can’t be cached. (To see the details of how and why we changed, start at phuketgazette.net/computers and look at the Live Wire columns for June 8 and 16.)

The results, at least to me, are stunning. Ready to bust some myths?

Based on this early data, True’s Ultra 10 Mbps service – the one that uses Cable TV style coax cables and a technology known as DOCSIS (see July 7 Live Wire), gives the fastest all-around speeds on the island. I didn’t see any significant benefit in Ultra 20 Mbps over 10 Mbps, but we don’t have enough reports yet to say for sure.

Surprisingly, TOT’s 5, 6 and 8 Mbps lines pull in next – but they all run international downloads at basically the same speed, so there’s no reason to pay for a faster line. (TOT has just announced a marketing program called “Net Zing” that has lines at 3, 6, 9, 12 and 15 Mbps. We’ll be tracking those in the future.)

True pulls up the next couple of slots, with its 6 Mbps ADSL line garnering faster reported speeds than its 10 Mbps line. 3BB has fallen from its number one spot as the fastest service on the island, a couple of years ago, to dead last place. CAT’s wireless EV-DO (which they call “3G” but, in fact, won’t work with 3G phones or iPads) shows a respectable 1 Mbps. The new AIS and True 3G services will both have a hard time keeping up with that pace.

I intentionally excluded TOT’s Fiber 2U service from the graph for two reasons. First, the numbers we’re seeing would have skewed the graph so it would be impossible to read – as you can see at PhuketInternetSpeed.com, Fiber 2U lines at 20 Mbps and 10 Mbps are running consistently in the 6 to 9 Mbps range, blowing everything else out of the water. But dig a little deeper and you’ll also see people reporting outages, frequently, all over the island. Here’s a typical comment: “I am very disappointed with the quality of the service. It only works now and then, and normally I have to request a download of a web page three or four times.”

It looks like much of the problem with TOT Fiber 2U lies with the routers (you might call them “modems”). I’m hearing reports from many people that the standard-issue TOT Fiber routers don’t work worth beans, but they can and will install better routers if you’re insistent. By the time you read this, it’s entirely possible that they’ve fixed the problem. We’ll find out on the next speed summary.

A note on the methodology. Khun Roger, who’s one of the regulars at the Sunday morning Computer Clinics, pulled the numbers together. We dropped any service that only has one person reporting the speeds. We also dropped the “zeros” – which indicate no service at all. TOT Fiber, 3BB and True all had multiple reported outages. Surprisingly, in spite of anecdotal evidence to the contrary, TOT ADSL service was pretty stable over the past two months.

Most of all, this isn’t a scientific study: it’s self-reported, non-replicable and far from random. So understand that the numbers here are indicative, not definitive. That said, I think the numbers speak volumes.

If you aren’t yet reporting your internet speeds, head over to PhuketInternet
Speed.com and sign up. The more reports we get, the more accurate the information will be – and the more likely Phuket’s Internet Service Providers will stand up and take notice. You’re welcome to download the information on the site – there are easy ways to filter and download the data – and analyze it any way you like. It’s a unique community resource and absolutely free with no strings attached.