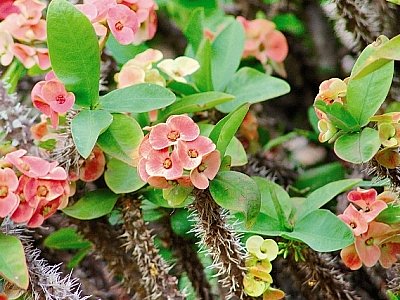 PHUKET: The crown of thorns, or euphorbia millii, is a succulent plant that doesn’t require much attention.

When the word “succulent” is used, it is usually applied to juicy, delicious fruit such as ripe mangoes, oranges, or pineapples.

But for horticulturists, the word has very different connotations: it refers to so-called “fat plants” that store water in their leaves, stems, roots or bulbs.

These plants have an unrivaled capacity for retaining moisture, and, like the proverbial camel, can thereby survive in arid, desert-like conditions. Naturally, most of them grow in hot climates, where water shortages and dry soil conditions are the norm.

Many of them exhibit their “succulence” by possessing swollen stems, or thick, leathery leaves and outer skin.

If precipitation falls on these waxy leaves, it often stays there as drops – rather like water on a newly polished car – slowing the process of evaporation.

Half an hour after watering there can still be droplets of rainwater on the leaves
of a crown of thorns (euphorbia millii), for example.

Euphorbias are one of the largest genera of succulents, rivaled only by the cacti. So let’s initially concentrate on them.

Euphorbias are often confused with cacti, especially the tropical and usually prickly varieties. All contain a poisonous and milky sap which is typically white and sticky – very much like the latex that oozes from rubber trees.

This sap is particularly resistant to evaporation. If you cut off a section of stem, sap will exude from the wound like blood, but will as quickly coagulate and prevent further dehydration of the parent plant.

Most are armed with sharp spines, hence the occasional confusion with cacti.

These not only provide a formidable line of defense, but help retain a degree of humidity in the plant’s immediate surface environment.

Most Euphorbia are grown for their arresting and highly unusual foliage, but the crown of thorns has the added advantage of attractive red, cream, or yellow flowers.

Its praises have been sung before in these columns. Suffice to say, it is perhaps the best of all pot plants for a terrace or patio, and can be relied on to flower more or less all year round. Two specimens in containers by my pool have never been out of bloom.

And let’s not forget the flowering variety, which produce masses of tiny, scarlet blooms, or the cultivar that has a crown of large leaves surmounted by a head of vivid scarlet flowers on top of a single, thick, thorny stem. This one is not easy to find, but it is worth the search.

Other euphorbias may be totally different in appearance. Trigona, for example, is a succulent shrub from Africa that occasionally puts in an appearance in nurseries here.

It has an upright habit with dark green, triangular-sectioned branches that carry reddish spines all the way up from the base. An attractive cultivar with more pronounced red spines is called the “red devil”. It makes a fine house plant – if you can find it. And although it looks just like one, it ain’t cactus.

A much larger member of the euphorbia family of succulents is lactea, sometimes referred to as the candelabrum cactus on account of its size and shape.

As a specimen growing on a side road near Nai Harn attests, it can grow up to 15 feet high.

With its mottled green and white branches and brownish spines, it can look truly spectacular. Moreover, it is not averse to being planted in a large pot.

The prime virtue of all these succulents – apart from their unusual appearance – is their resistance to drought. These are easy-going plants that are well worth considering if you want a minimum-upkeep garden.

If you have a garden that you would like to be featured in this page, please email: pcampbell45@gmail.com