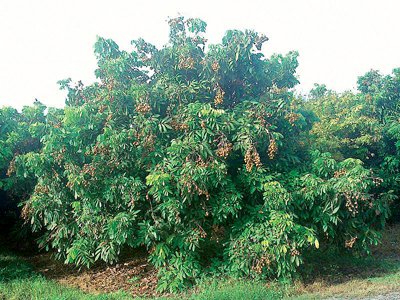 PHUKET: From blocked canals to poor flood management, the debate rages as to why Thailand suffered the floods of 2011. And while the arguments continue, the plight of many fruit farmers has attracted little attention, even though their livelihood has disappeared with the receding waters.

Fruit trees, like most plants, suffocate through lack of oxygen if submerged for any length of time: hence the lifeless orchards of pomelo and rambutan in Nakhon Pathom.

I mention this because Phuket has mercifully been spared the inundation. So there remains every incentive to cultivate small fruit trees in your garden. What happened to orchards in the plains of central Thailand will not happen here. Unless of course you choose a fruit tree that is unsuited to Phuket’s conditions.

For example, it would be great to grow the edible fig (ficus carica). In the Mediterranean region, these trees are not only extraordinarily hardy, but produce masses of succulent and delicious fruit. But Thailand’s hot and humid climate, though entirely congenial to almost every other variety of fig, including the notorious strangler, causes root rot, or mildewed foliage in edible figs.

Dimocarpus longan, referred to in some books as euphoria longan, and known here as laam yai, is a prosperous native of Southeast Asia and thus a good choice for your garden. To start with, it is an evergreen tree, so collecting dead leaves is less of a chore. Moreover, it is of manageable proportions, rarely exceeding eight meters in height, has dense, dark-green foliage and grows evenly and symmetrically. It prefers sandy, slightly acidic soil and can be grown readily from seed.

However, its main attraction is the fruit, colloquially known as ‘dragons eye’ because when peeled the large jet black seed shows through the translucent flesh like a pupil and iris. The reddish-brown fruit hang down in loose, grape-like clusters from which the thin, bark-like shell is easily removed. Many Thais have a knack for squeezing out the ripe fruit like cracking a sunflower seed. In taste and texture , the laam yai is sweet and juicy, a favorite in soups and especially in desserts. It can also be smoke dried and preserved.

The plant is a member, like the lychee and rambutan, of the soapberry family and its seeds can be used for shampooing hair, apparently.

Deservedly popular in Thailand, the fruit has never become as well-known in Europe and the New World as its cousin the lychee (litchi Chinensis), though to my taste buds, when eaten fresh from the tree, it has a better flavor. Lychees do produce more spectacular fruit with a pink or strawberry red rind which are larger (5cms) than those of the laam yai and slightly perfumed. They prefer slightly cooler conditions so perhaps this explains why lychees are more widely grown in sub-tropical Asia, especially in China, where they have been a delicacy for more than 2,000 years. Indeed, I suspect the canned fruits are familiar to most Westerners, even though the distinctive perfume of the fresh fruit is lost in the canning process.

But for my money, I would choose to cultivate the laam yai rather than the lychee in my garden. There is something more distinctively Thai about it.

If a tree in your garden needs frequent pruning, it is probably too large for its environment. However, if you do have to prune heavily, try to avoid topping, i.e., reducing the height of a mature tree by sawing off all its top limbs. The tree will not grow back in a natural way.

When sawing off a large limb, shorten it to a stub. To do this, select a point a foot or so along the branch, and make a cut from the underside, about a third of the way through. Then, about an inch further out on the branch, cut straight down from the top until the limb splits cleanly between the two cuts. Finally, saw through the remaining stub close to the trunk.

This method will avoid ripping and splitting the bark. Such wounds leave the tree open to infection.