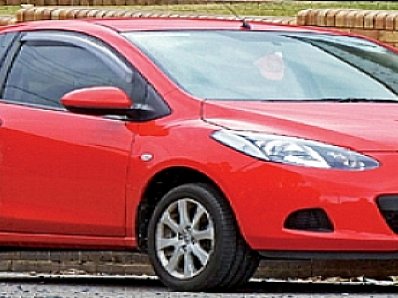 PHUKET: Seven hire cars remain missing from a Phuket rental firm. Two suspects are in custody but three more are evading capture having failed to return the vehicles. The rental company owner suspects they may have been fraudulently sold or have been used to get finance from a pawn-broker.

In the middle of October last year, Sarun Thongularn, 37 and two friends got together and started up a car rental business. However, by the end of the year, seven of their vehicle fleet were missing with the renters either arrested or in hiding from the police.

“We have lost seven cars, including five new cars with red registered plates. However, we have just recovered the eighth car,” Mr Sarun said.

“One of my business partners has lost five of his new cars. Models such as a Toyota Fortuner, an Isuzu Mu 7 and a Mazda 2. My other friend lost one new car and I have lost a Toyota Vios, which cost 500,000 baht. All together the cars cost about 6 million baht,” he said.

“We do not have any commercial insurance for the cars as we just bought them. We were supposed to sort out GPS and get the insurance later,” he added.

Mr Detrit, who had already hired out four cars for a month, asked Mr Sarun on November 10 to rent a fifth vehicle for five days. Detrit’s wife, Ms Janthip, collected the car leaving her motorbike and driving license with Mr Sarun.

“When they were three days late returning the car we called them. They said they would transfer the money as they were not in Phuket. We got the money for the five day extension,” Mr Sarun explained.

“I kept calling them; sometimes their phones were off and sometimes they picked up, but said they were busy,” he said.

“We didn’t know that the missing cars were connected until Sirirat was arrested and confessed to Phuket City Police that Detrit had asked her to rent the car,” he said.

Ms Sirirat , who rented a car on November 12 was arrested at a Panthep apartment on Mae Luan road about a month ago. Mr Sarun explained that they knew where Sirirat lived, because he had picked her up at her apartment when she had rented the car.

Wassana, was caught by the police on December 25 near the Bangkok Hospital Phuket. Mr Sarun explained that he and his friend “tricked” her into meeting with them, allowing police to catch her. Mr Sarun said police had told him Wassana had previously been involved in similar incidents.

Thalerngsri Promrat, who was caught with Wassana, was released after police investigated her claim that she had been tricked by Wassana and didn’t know anything about the stolen cars.

The car that Wassana had rented, however, had already been pawned in Ao Luk, Krabi. It reportedly cost Mr Sarun’s friend 100,000 baht to get back.

“Theerawat, who said he was a land surveyor for a private company, rented a car in October 31 and disappeared. We’re not sure if he is part of the same gang as Detrit, but his behavior was the same,” Mr Sarun said.

“We have to pay by installments for nothing now. It costs me more than ten thousand baht a month. Meanwhile, my friend has to pay for five cars,” Mr Sarun said.

Mr Sarun is now only renting cars to foreigners and asks that they leave their passports with him.

An arrest warrant relating to a charge of assault was issued for Detrit on August 17 by Phuket Provincial Court, though police suspect that he is now in Surat Thani. Meanwhile Sirirat and Wassana remain in jail attempting to raise the bail money.

Phuket City Duty Officer Taweesak Yongkae told the Gazette that the case is currently under investigation.