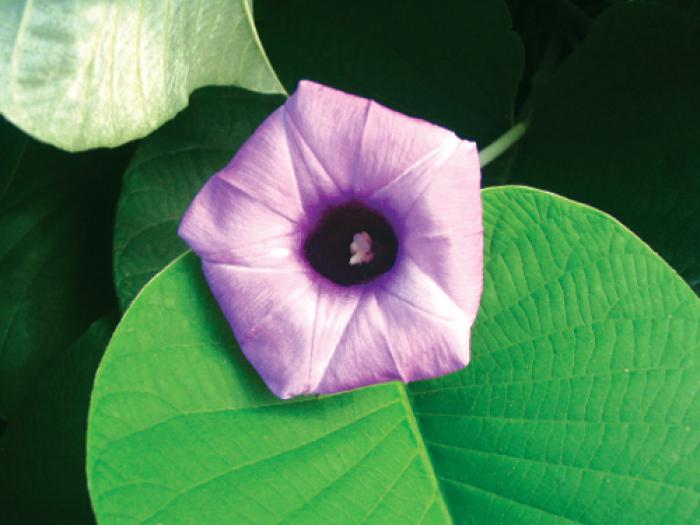 PHUKET: A few columns back I threatened to return to the topic of easy-to-grow climbers. Some of the varieties mentioned then are indeed tough and resilient, but they are not natural vines inasmuch as they lack aids in the form of suckers, twining stems, modified leaves or tendrils to help them cling and ascend.

That they are substantial and weighty plants means that they need support of some kind or another, a requirement that inevitably takes up more of the gardener’s time and patience. Certainly they can be trained to flow over garden fences, pergolas, trellises and walls, but they do need to be given human aid and direction. Allamandas, solandras (chalice vines), thunbergias, Indian rubber vines and Rangoon creepers all come into this category. Even bougainvilleas, though these do cheat a bit by having vicious curved spines that enable them to get a grip on other plants, though not on smooth surfaces such as garden walls. All these vines happen to be personal favorites, since they are spectacular bloomers and extremely tolerant of a range of conditions for growth.

Among the genuinely low maintenance, self-sufficient climbers, perhaps the easiest of all is antigonum leptopus. That it has become invasive in parts of the southern states of America, is a clear reflection of its durability. Better known as the coral vine or Mexican creeper, I have seen it growing on a neglected roadside site in Chalong. It climbs rapidly with the aid of tendrils which can readily support the dense mass of heart-shaped leaves and attractive racemes of deep pink florets.

Having the inestimable advantage of flowering almost all year long, the coral vine can grow quite tall – maybe five meters in favorable conditions. Though it normally spreads by forming underground tubers and substantial root stocks, it also produces masses of seeds which germinate readily. Antigonum will also take from hard wood cuttings. If that is not enough to get you going, it is a popular potted plant in garden centers. It is fussy only about adequate moisture for its roots: perhaps I should pop among and see how the Chalong specimen is coping with the current spell of prolonged dry weather. But even if it has died back, it will probably reappear once the rains return.

Another toughie is the imopoea, usually referred to as “morning glory”. Associated with the so-called “flower power” movement of the sixties, the convolvulaceae genus contains some 400 species, and like the coral vine, its more vigorous brethren have become naturalized in some parts of the world. A single morning glory flourished on my baking hot patio in Andalucia, producing fifty or more blooms every day. Without visible means of support, it still managed to cling to the stuccoed walls. This variety, known as indica, has trumpet-shaped flowers of an intensely deep blue which turn to violet as the sun bleaches the color away.

Much more common here is a pink or pale mauve form (pulchella) which often grows wild. Horsfallia is a rare red version, while alba (known as the moon flower), is atypically not a sun worshipper at all, saving its huge white flowers for the arrival of twilight. Since the fragrant but fragile blooms then open quickly, it is possible to watch them unfold as dusk approaches. Because of this, it is not suited to a sunny tropical location. Give it a sheltered berth.

The elephant creeper or argyreia nervosa is another convolvulus that will thrive in Phuket, even though – and perhaps oddly – it is infrequently cultivated. Also known as the silver morning glory, it is the variety most associated with hallucinogenic properties, and contains lysergic acid amide (LSA), though increasingly its medicinal value (as an immune system booster), is being explored. In aesthetic terms, argyreia is a handsome, vigorous climber with distinctive large leaves which are silvery beneath. The rose-pink flowers are huge, and furry. Sadly these are often hidden among the lush foliage.

Nonetheless, this is another excellent choice for your low-maintenance garden. And once installed, it is bound to become a talking point.

Phuket Property Watch: Lost in the belly of the beast