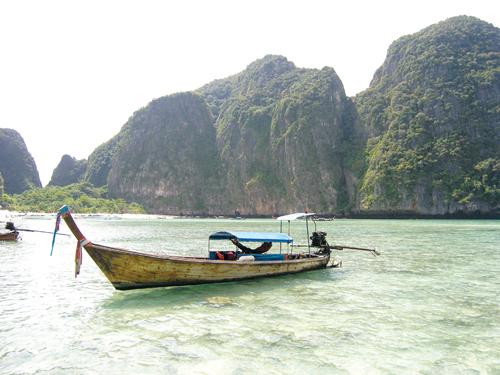 PHUKET: The roar of a well-oiled second-hand car motor destroys any hope of silence, despite there not being a road or traversable land for kilometers around us. Originating in and still dominating the waterways of Southeast Asia, longtail boats are the most unique way to reach a dive site from Phuket and other Andaman areas.

However, diving from a traditional Thai longtail boat is sadly overlooked by many holiday divers.

Falling into familiar patterns, we book trips on big boats heading out to the better known dive sites off Phuket, such as Anemone Reef, Shark Point, The King Cruiser or one of the Koh Rachas. Those with the money and desire for a more boutique experience charter smaller modern craft.

There is nothing wrong with getting to a dive site by either of these methods, and in many ways they are preferable. Most boats are comfortable, provide a healthy array of food and offer plenty of deck space for bronzing up between underwater explorations.

However, these boats are missing something unique, something that can in many ways create a dive experience that is nearly impossible to re-create outside of Southeast Asia.

With a foot on the tiller, our boatman swings the boat around the northern tip of Phi Phi Don, slicing through the calm water.

Sitting near the back, not far from the massive motor, it is impossible to talk.

Our wooden-hulled boat zips between the ancient uplifted coral reefs that were once part of the world’s largest reef system, covering a great deal of central Thailand and stretching beyond the border of modern day China.

Well-worn through weathering and ocean erosion, what’s left of the ancient system is now the classic karst towers of Krabi, most topped with little dangling toupees of dense green jungle.

In the boat, with our gear packed into the wooden bow, there is a buzz of excitement coming from the divers.

From our vantage point in the low lying craft – the wooden plank seat – we see the colorfully wrapped stemhead and salt water spray kicking up as the bow slaps into a small wave, and feel very much like we are part of a long-ago adventure.

No doubt the Moken and other Sea Gypsy populations who settled the Andaman waters hundreds of years ago were paddling similarly hulled crafts as they fished, traded and freedived off Phi Phi, Phuket and the rest of the coastline.

Unlike most dive trips, where the adventure doesn’t begin until you splash in, ours is well underway.

The boat glides to a rocking stop not far from one of the limestone towers in Nui Bay. Masks pressed firmly against faces and regulators held in place, one by one members of the small dive team roll back off the wooden rail of the longtail and splash into the warm water.

A quick ‘okay’ sign to the boat boy and the team takes the plunge.

Although Barracuda and Shrimp Fish show up on the dive, as well as hundreds of mating Blue Dragon nudibranches – they are all icing on the cake.

Phuket Lifestyle: PIMEX is better than ever