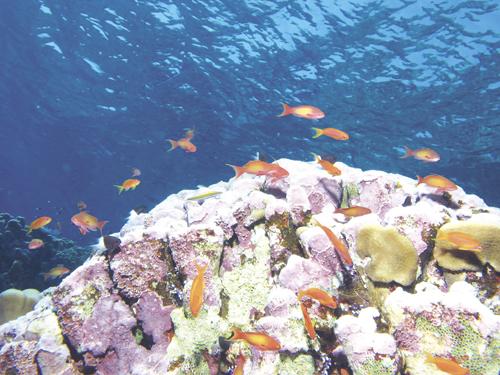 PHUKET: The texture from the flaking, oxidized iron of the 1700s hand grenade is a novelty in itself as we sit at five meters on the 1724 Guadalupe Underwater archaeological Preserve. The Dominican Republic “wreck” complete with ancient pieces of broken amphora pottery, ballast stones, cannons and other artifacts from the period, was developed as an underwater museum exhibit available to those with the desire to explore this underwater world and see what a “virgin” Spanish galleon wreck might look like.

The idea of a turning a submerged cultural resource into an underwater museum is at the forefront how we think about artificial reefs – the next important development for Phuket diving.

As the tourism industry in Phuket continues to skyrocket, “land people” worry about the infrastructure: roads, water, electricity, and the preservation of steep jungle slopes and mangroves. But for “underwater people” such as divers and snorkelers, it’s hard not to also fret over our precious reefs.

The dive industry in Phuket, with quality diving from a paradise island that an airline jet can land on, is booming. The increase in the number of divers from around the world using Phuket as a base for their first exploration of the underwater world or using it as a jump off point to the Similan Islands is creating mounting pressure on the island’s marine ecosystems.

Because of this pressure, it is no wonder that organizations such as Go Eco Phuket are scrambling to find suitable solutions through the creation of artificial reefs. The Royal Thai Navy has already donated two decommissioned vessels to Go Eco Phuket to be scuttled and sunk.

A different approach to artificial reefs landed on the blackboard last year, as start up company Reef Worlds, specializing in highly stylized artificial reefs, designed by some of the same artists that worked on the sets of Lord of the Rings and Avatar, started working with a couple resorts in Phuket in an attempt to revolutionize the concept of artificial reefs.

Artificial reefs, when done properly, diversify the dive opportunities available to divers. They can be educational tools for underwater archaeological course work, training sites for tech divers or simply another delightfully interesting substructure for corals and other marine life to call home.

However, unless done well, these artificial reefs can simply float away, as did the Phuket “Coral Reef Squadron” did, not so many years ago. Though the efforts of sinking the 10 military aircraft might have ended in naught, with rumors of the submerged crafts “flying” as far north as Burma, they did not wreak the same havoc as another failed artificial reef project launched in the United States in the 1970s.

The government-backed community “Osborne Reef” project consisted of dumping and attempting to tie down over 2 million used vehicle tyres as the superstructure for an artificial reef. Shortly after the project was finished the tyres like Phuket’s aircraft tore free from their chains. Unlike the aircraft, the tyres have destroyed and continue to destroy natural reefs and other marine ecosystems in the Gulf of Mexico.

The importance of artificial reefs in the future of diving in Phuket, and around the world,
is undeniable.

The technology and momentum is there to take us beyond the reefs we know, into a world of concepts, living on the edge of our imaginations. These substrates can become home to the corals we love and the mega and macro fauna that makes us smile to the point that water leaks in around our regulators.

But to do so, without having our reefs take-off into the unknown or destroy those familiar reefs we love, it is important to take a long look back at the history of artificial reefs, so that we can have a better understanding of what resources we have now, and what direction we should set our compass for.