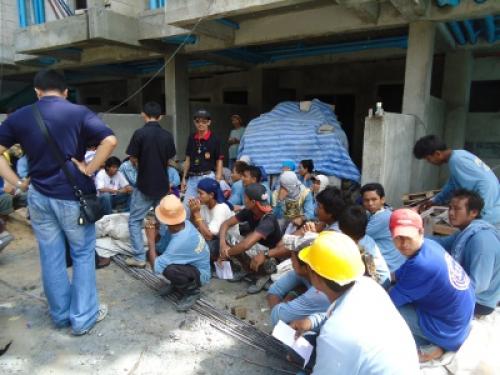 PHUKET: Any migrant workers found in Phuket without having completed the nationality verification process will be deported, the chief of the Phuket Provincial Employment Office (PPEO) has warned.

“The deadline for migrant workers to complete the nationality verification process was extended by six months, from June 15 until December 14,” PPEO chief Yaowapa Pibulpol told the Phuket Gazette.

“During that time, migrant workers must have completed the nationality verification process and applied for permission to legally work in Thailand.

“Anyone found to have not completed this process, but who continues to work illegally after December 14 [yesterday] will be charged and deported, both Burmese workers and their employers,” she added.

Under the Alien Worker Act BE 2551, employers found hiring migrant workers who have not been issued valid work permits face a fine of 10,000 to 100,000 baht per illegal worker.

“We have yet to decide when and how we will enforce this, as we have yet to consult other agencies,” she added.

National reports estimate that anywhere from 500,000 to 800,000 migrant workers in Thailand face being repatriated to Myanmar this weekend for failing to have completed nationality verification.

In Phuket, officials have for years estimated the number of Burmese working illegally on the island to be around 100,000.

In Bangkok, the Thai Chamber of Commerce on Thursday called on authorities to extend the deadline for nationality verification.

“Otherwise, the country’s export and economic growth will be adversely affected,” chamber vice president Phumin Harinsut said, in reference to the fisheries and related industries that generate 150 billion baht in income from exports each year.

However, Labor Minister Padermchai Sasomsap has yet to respond to that request.