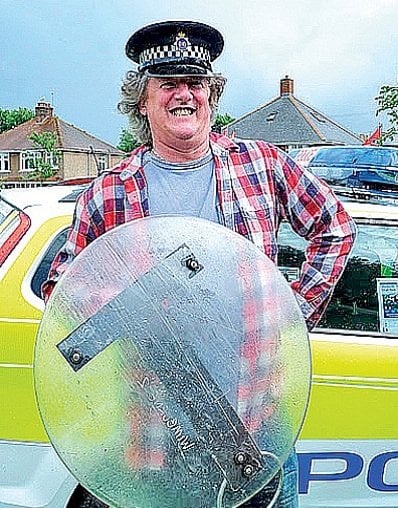 Where and when were you born?

Andy Smart: I was born in Portsmouth in a nursing home that is now appropriately a Casino, in 1959.

PG:Any amusing tales from your childhood and/or school days?

AS: I drowned when I was 7 in the Basingstoke canal, and was clinically dead for about 2 and a half minutes. Luckily my father had been a deep sea diver and knew CPR and brought me back to life. I also broke the world record for distance covered in an hour on 3 ft stilts in 1973. When I was 17 I lived on the Mattoponi Indian Reservation in West Virginia USA for the summer.

PG: Did you attend University or some other Higher Education establishment?

AS: I went to Notre Dame Teacher Training College in Liverpool to do a General BA in Geography and Drama. (“Yond hill ist granite my liege!”)

PG: How, when, where and why did you become a comedian?

AS: I started as a juggler on the street at Covent Garden, before joining up with Angelo Abela as the Vicious Boys in 1983 and we were Street Entertainers of the Year in 1984. I loved the life, I definitely wasn’t cut out to do a 9-5 job. I love the sound of laughter in the morning!

PG: Did you/do you have any comedy heroes?

AS: I loved Tommy Cooper as a kid, the childish joy of a grown man telling bad jokes and failing to do magic, entranced me, Morecombe and Wise too. Nowadays I love Sean Lock and Tom Stade, they aren’t doing sets like anyone else, they take chances on stage. I also like Stephen Frost, he is relentless with the puns, and Steve Steen is pure unadulterated filth, he goes where I wouldn’t dream of treading, they both have me in tears. Ian Coppinger is a dream to work with, never stuck for words and great at making up songs on the spot. His height is a constant source of comedy too!

PG: Have you been to Thailand before? If so, when, where and what did you like and dislike about it?

AS: Yes, but only Bangkok. We always have fun there. One late night we were walking home through Patpong, a moped pushed past us with two steel discs on the back. Stephen Frost saw them and said “Look boys, bongos” and proceeded to play them before screaming with pain as they were actually a cooker’s heated rings. I haven’t laughed like that for ages. Another time I was walking home on my own in flip flops, when I felt a sharp pain in my foot, I looked down and found that I had kicked a syringe. Like a fool I pulled it out and threw it away. On my return home I got tested for HIV and Hepatitis, but the doctor said I wouldn’t be able to have sex for 6 months in case it developed later. I didn’t like that. I will be wearing hiking boots this trip.

PG: Is there a difference between performing to an audience of expats and an audience at home?

PG: Where is the best and worst place you have performed?

AS: New York is always fun, there is something in the air there. We did one amazing show there with Eddie Izzard and Mike Myers! Beirut is pretty stunning too.Worst? Qingtao in NE China. The audience was mainly Dutch and German market gardeners!

AS: Because we don’t know what the other person is going to say, we can end up laughing as much as the audience, there are times when no one can speak because we and the audience are all laughing, it would look so surreal if anyone came in at that moment.

PG: Any other useful info for an article about you?

AS: I have performed at 31 consecutive Edinburgh Festivals. I’ve performed at every Glastonbury since 1984. I’ve run with the bulls in Pamplona 53 times, one year I did all 8 runs from the 7th-14th of July! I am a professional poker player and have a 100 meters swimming certificate.

Phuket Lifestyle: Jan Sylan as described by an officer and a gentleman

Phuket Lifestyle: An elephant that is hard to forget