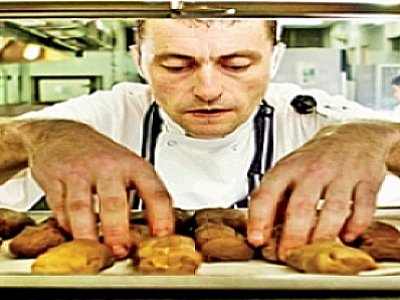 PHUKET: Phuket has elephants but at the elegant wine dinner held at the Evason Phuket last week, the only elephant there was the one featured on the bottles of Cos D’Estournel.

Evason Phuket has a long history of bringing great wines and winemakers together with guests at their special SLOW (Sustainable, Local, Organic and Wellness) gourmet dinners where the wines are paired with exciting innovations from the kitchen.

The evening featured one of the finest wines money can buy and was three years in the preparation with the Singapore based representative of Cos d’Estournel, Valentine Bourrié, who cut through oodles of red tape to bring her ruby colored treasure to the table. Cos d’Estournel is a Grand Cru Classé from Saint-Estèphe and sits next to Château Lafite-Rothschild in the neighboring commune of Pauillac.

This is as good as it gets and Evason’s Executive Chef Kevin Jean Fawkes had the enviable task of tasting the wines and then designing the menu.

First up was a 2009 Goulée blanc, similar to some Loire wines, this fresh and fruity white was paired with among other starters, Escargots Bordelaise.Yes, snails.

Next on the menu was barracuda realized as a Chateaubriand, served with beetroot with pancetta panna cotta. This delicious fish was presented with our first red, a Pagodes de Cos 2007 whose generous smokey aroma was like liquid velvet. The pagodes refers to the pagoda style roof at Clos d’Estournel and was our first hint that the wine’s links with Asia go way back.

Valentine Bourrié explained how the wine is named after Louis-Gaspard d’Estournel who inherited 30 acres of vines in 1810, and then bought the whole hill or “Clos” as they call it in the local patois and created the fine wines over the next thirty years. The cellars he constructed are unique and built with pagodas, most probably to reflect his journeys to the Orient. Louis Gaspard D’Estournel was known locally as Maharajah of St Estephe and the Indian Elephant mentioned earlier features on the label and is the winery’s logo. The main door of the Château, a ‘Bulund Darwaza’ was imported from the Sultan of Zanzibar’s palace.

It was the golden time for his wines which were drunk by Queen Victoria of England, Tsar Nicolas I of Russia, Emperor Napoleon III, Jules Verne and even Karl Marx.

She recounted some fascinating stories related to the Asian connection as Louis Gaspard d’Estournel sold his first wines in India.

One consignment of Cos d’Estournel shipped to India had to be returned for some reason and Louis Gaspard d’Estournel observed that the wine which had traveled had actually improved during the voyage as a result of the gentle swaying of the ship. He had the wine brought back to his cellars, endowed it with a label marked “R” which for the initiated meant “Returned from India”.

Next up was a “three hour smoked duck egg” deconstructed and served with a mushroom consommé and confit chanterelles. The perfect partner to this rich course was an opulent deep crimson Cos d’Estournel 2007 whose tannins washed over the rich yolk cooked at low temperature for three hours.

At our table were two Norwegians who were accustomed to our next dish, saddle of roe deer served with liquorice and celeriac baked in charred hay. They explained that it was reindeer that they normally consumed, but agreed that the 2004 Cos d’Estournel was sublime. This was what the Maharajahs would have drank being a deep, dense and truly classic wine.

“I was torn between a salty Roquefort to offset the sweetness or a dessert to match it and decided to do both with a Roquefort ice cream served with a salty caramel biscuit covered in gold leaf,” he said.

Amazingly, it worked and the combination of flavors in those final mouthfuls is what brings true connoisseurs back again and again to the award-winning Evason gourmet dinners. Magnifique!