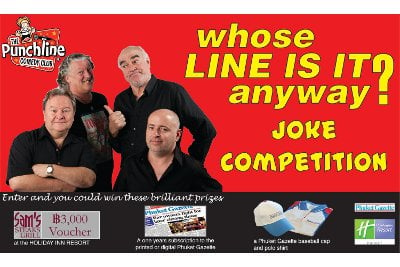 PHUKET: Phuket’s Punchline Comedy Club special February 29 show is only a week away and this is the last call for early bird tickets.

The infamous “Whose Line Is It Anyway” crew will take to the stage at Patong’s Holiday Inn next Wednesday evening for a performance that would even bring a smile to the face of Tom Cruise, considering he is the focus of the event’s joke competition.

The joke question is: “What’s the difference between Tom Cruise and a tuk-tuk?” Send your punchline to info@phuketcomedy.com for a chance to win great prizes and to get your answer read out at the show.

Panelists for the evening will be; Stephen Frost (Blackadder, and Have I Got News For You), Andy Smart (Comedy Store Players and Paul Merton’s Improv Chums), Steve Steen (A Bit of Fry and Laurie and Red Dwarf) and Ian Coppinger(Kilkenny Cat Laughs and The Comedy Improv Radio Show) – just a sample of the comedic caliber these giants of the comedy circuit have to offer – except for Ian Coppinger, whose only a small chap.

Seats are limited for this extravaganza of wit and uncensored mirth, and already capacity is on the horizon. The “early bird” rate date concludes on February 22, so book your place now to not only save a schekel, but ensure you don’t miss out on a night that will go down in tha annals of Phuket comedy.

Tickets can be purchased through PhuketGazette.net/tickets or visit PhuketComedy.com for a full list of outlets.

The Phuket Gazette is a charter sponsor of the Phuket Punchline Comedy Club.