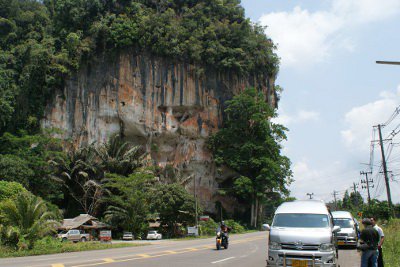 PHUKET: A boulder weighing at least one tonne plummeted off a roadside karst near the tourist-popular Ao Nang beach in Krabi this afternoon.

The boulder landed in the middle of the road between Krabi Town and Ao Nang, leaving a 30-centimeter deep crater in the road surface, and splintered into smaller boulder fragments.

Unable to stop in time, a tourist van swerved and missed the main boulder but struck one of the fragments, damaging the vehicle’s radiator, explained Nattapong Chaidate, a 35-year-old van driver at the Aonang Orchid Resort.

“I was on my way back to the hotel when I saw the rock in the middle of the road. I swerved left to avoid hitting it, but I hit the other rock,” he said.

He temporarily lost control of the van, but managed to stop the vehicle by the side of the road, Mr Nattapong added.

However, another van from the same hotel following behind – but this one full of tourists – was not so lucky.

“When I came around the curve I could not see the rock,” said Thawatchai Changsanan.

The van struck the main boulder, causing the front left tyre to burst.

“Fortunately, I was not driving fast. I pulled the van by the side of the road and called another hotel van to pick up the passengers and take them safely to the hotel,” Mr Thawatchai said.

No people were injured in the collisions.

Local municipality workers have now rolled the remains of the boulder into the ditch beside the road.

Thalerngchai Puwayannapong, chief of the Department of Disaster Prevention and Mitigation (DDPM) Krabi office, attributed the boulder’s fall to heavy rains in the area recently.

“It is possible the pieces of rock fell off the karst. A few days ago there was continual heavy rain, which could have loosened the soil and allowed the boulder to start moving,” he said.

“This is the first time I have heard of this happening. I do not think any earthquake was involved, but we will have a specialist check anyway,” Mr Thalerngchai added.