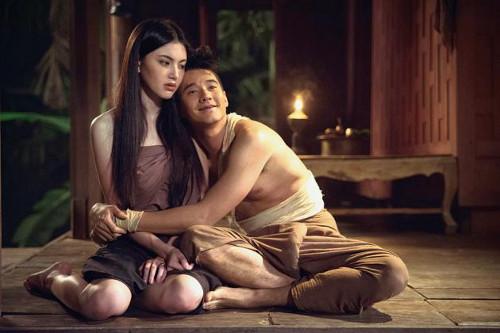 PHUKET: Thailand’s top grossing movie of all time, ‘Pee Mak Phrakanong’, stars five war buddies with black teeth and silly hairstyles. One still wears a toddler’s topknot of the Rattanakosin period, explaining, “I got sick when I was a kid and mom vowed that if I recovered I’d keep this hairstyle forever.”

They face a fierce enemy together, suffer terribly, and forge a deep bond.

Mak is shot in the chest and looks like a goner. But he pulls out a photo of his wife, Nak, wipes some gore from it and refuses to die, so great is his desire to see her again and meet their new baby.

He miraculously recovers and returns with his four friends in tow to his simple wooden house on the bank of a river. Reuniting with his wife, he coos “I missed you so much, baby, so soo sooooo much!”

This is a love story.

Downstairs, his friends, listening in, look at each other. One says, “Geez, Mak is really whipped.”

This is a comedy too.

It’s also a classic ghost story that’s been remade again and again. Every Thai already knows that Mak’s wife died giving birth to their child and is really a ghost.

Mak’s friends quickly figure this out and try to convince Mak to run away, but he’s a dumb bunny and stubbornly in love besides, and refuses to believe them.

His somber wife Nak doesn’t say much, just glowers threateningly as the friends gather evidence and bumblingly try to perform a ghost authenticity test on her.

Thais like the Mak ‘n Nak story. A previous version, ‘Nang Nak’, was the highest grossing domestic film ever when it came out in 1999.

Other interpretations have been scary and sad, but ‘Pee Mak Phrakanong’ is lighthearted and funny, and Thai audiences are lapping it up.

The movie was hot out of the gate on March 28, with the second strongest opening day for a Thai film. 10 days later it became the second highest grossing domestic Thai film ever.

To beat ‘The Legend of Suriyothai’, which had taken the top-grossing domestic film spot in 2001, ‘Pee Mak’ had to pull in over 550 million baht, which it did in the first week of May.

As of May 12, Box Office Mojo reports total domestic and foreign ticket sales of over 950 million baht. The movie has done so well that its producers offered a week of discounted tickets – 80 baht – as a ‘thank you’ to viewers.

What happens at the end?

In previous versions, once Mak discovers his wife is a ghost – by seeing her lengthen her arm to pick up a piece of fruit that had fallen to the ground about 3 meters away – he can’t bear to be with her anymore and runs away.

In this one, goofy Mak turns out not to be such a sucker after all. He knew all along that his wife was a ghost. “Don’t you think a man knows when his wife is dead?” he asks his friends.

But he loves her too much to leave her.

And it’s his ability to keep loving her, albeit with requested compromises – “Honey, please don’t hang upside down again, you know I’m scared of ghosts”that makes the movie, despite its silliness and slapstick, feel tender and real.

‘Pee Mak Phrakanong’ is showing in Phuket at SF Cinema City in Jungceylon, SFX Coliseum Cinema at Central Festival and at Coliseum Paradise Multiplex at Ocean Plaza in Phuket Town.

It has English subtitles.