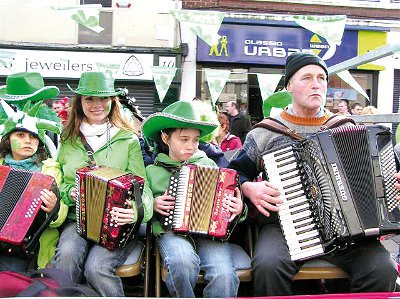 PHUKET: Let the celebrations begin! It’s that time of year again when the shy and solemn Irish expats around the world awake from obscurity to throw off the shackles of sobriety and enjoy a pint or two.

Yes, it’s Saint Patrick’s Day on March 17, and not only a day, but a whole weekend is available to indulge in all things Irish. Bar, pub and club owners will be wringing their hands in anticipation of a three-day spending spree and of course the free entertainment their Celtic patrons will undoubtedly provide through unsolicited singing and unnecessary dancing.

With all the merriment and ‘craic’ that will be exhibited from Friday to Sunday in honor of our patron saint, there will be another coinciding event that will encourage even more Irish out from the woodwork on Saturday night.

Emotions will run high that night. As the clock strikes midnight bringing us into Sunday morning, there will be mobs of Irish rugby fans standing in lines, arms locked across shoulders, mirroring the national team’s lineup as we all roar ‘Ireland’s Call’ at the television. Grown men will have tears in their eyes and not from the piece of chili that they accidentally swallowed with the salted bar nuts.

Anyone in the vicinity of these displays, that is not English of course, will undoubtedly have the hairs on their arms and necks standing on end. It is of course ‘the old enemy’ Ireland face in the Six Nation’s rugby international on Saturday and it doesn’t get much more difficult for England – battling the Irish on Saint Patrick’s Day – the only advantage they will have is that the game will be played at Twickenham.

Not that we are forecasting an Irish win, but others are supremely confident that we will be celebrating long into the wee hours of Sunday morning including the Honorary Consul of Ireland to Phuket, Hélène Fallon Wood.

“I will be guest of honor at the Irish Times pub in Patong on Saturday night. I will be there with Peter, my husband, to watch Ireland thrash England in the rugby,” Hélène told the Gazette.

“I’m looking forward to seeing everyone Irish there, and if not Irish come and join in the ‘craic’ of Saint Patrick’s Day at Jungceylon,” invited Hélène.

Whether it’s Patong for Scruffy Murphy’s and Molly Malone’s, or Karon Beach at Angus O’Tools – dig out something green from the wardrobe, get to one of the establishments mentioned above and have a decent Irish dinner to line the stomach and make Mum happy. Then tuck into a few pints of porter and maybe a whiskey to celebrate Patrick and hopefully an Irish rugby victory.

Beannachtaí na Féile Pádraig oraibh! May blessings be upon you all on this
St Patrick’s Day from The Phuket Gazette team.

Phuket Gardening: Location is everything