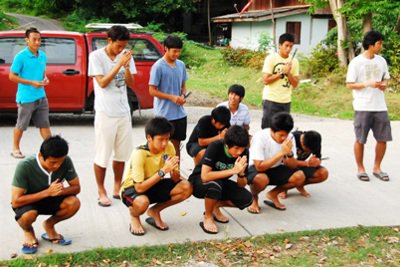 FC Phuket’s roller coaster end to last season will take a back seat today as they lock themselves in for a nosedive into their 2012-2013 Thai Premier League (TPL) season against JW Rangsit.

Their season opener will be played at the Chulachomklao Royal Military Academy Stadium in Nakhon Nayok, Pathum Thani with kickoff at 4pm.

It will certainly be an interesting encounter with three former FC Phuket players from last season in JW Rangsit’s panel. Abdoul Coulibaly, Tameezee Hayeeyusoh and Seksit Srisai signed for Phuket’s Division One opponents during the club’s period of uncertainty a few months ago.

FC Phuket president Narubas ‘Ko Lek’ Aryupong needs a successful start if the team are to develop confidence both in themselves and for their supporters. He also revealed that the club has now finished their search and signing of new players .

“We have already sent the player’s list to the TPL. There are 25 of them. I hope our team will bag three points to gain as much faith from the fans,” he said.

Among them are seven foreigners: Two from Brazil, two from Korea and three from Ivory Coast. Thai players make up the majority of the panel in accordance to the restriction on foreign players playing in the league as rules dictate. Three Phuket players (Kittithat Kraithong, Arwut Nuchet and Sutee Sakdiwong) have made the final cut with 15 other players included from Bangkok.

The four new foreign players include Mario Santos from Brazil, Kim Won Sup and Byeon Seong Won from Korea and Bamba Messi from Ivory Coast. If Mr Messi is half as good as his namesake, Phuket could have a very fruitful season in front of goal.

“Milos is an experienced coach, I believe he will make us survive this season,” Ko Lek said.

Ko Lek added that the team still needs financial support and fans can help by booking year tickets. “Year tickets are for sale now at 2,000 baht. With this price, the benefit is to watch every home match for free, receive one FC Phuket shirt, one scarf and one cap. I urge fans to book and help support the team.”

The Phuket Gazette will update readers with the final result after full-time.