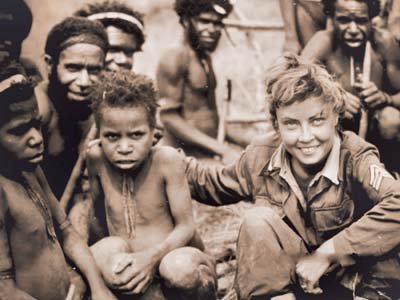 PHUKET: Mitchell Zuckoff is a hack journalist and a very good one. His specialty is dredging up old forgotten stories and making them new again.

His latest effort is Lost in Shangri-La (Harper Press, New York, 2011, 384pp). “Escape from a Hidden World – A True Story” is the subtitle of this tale of a plane wreck and rescue in New Guinea during the latter days of World War II.

At the time, the story made headline news and the three survivors were feted from one end of the United States to another. They are long since forgotten but Zuckoff brings them back to life again.

Lieutenant John McCollord, Sergeant Kenneth Decker and Corporal Margaret Hastings, a petite, beautiful, spunky corporal in the Women’s Army Corps, were the only survivors of a sightseeing C-47 transport plane that went down in New Guinea’s Balien Valley amid Stone Age tribes with no knowledge of the outside world.

The outside world wasn’t aware of them until 1938 when playboy American explorer Richard Archbold flew over a valley inhabited by over 60,000 tribal people who grew sweet potatoes, raised pigs and killed each other.

“They did not fight for land, wealth or power. Neither side sought to repel or conquer a foreign people, to protect a way of life, or to change their enemies’ beliefs, which both sides already shared. Neither side considered war a necessary evil, a failure of diplomacy, or an interruption of a desired peace. Peace was not waiting on the far side of war. There was no far side. War moved through different phases in the valley. It ebbed and flowed. But it never ended.”

The 22 military passengers on the C-47 were on a sightseeing mission over the valley when pilot error caused the plane crash into a mountain. After two days of recuperation, the three survivors fought their way through jungle and streams into a clearing. Here they set out yellow tarpaulin covers from life rafts to signal rescue planes and, sure enough, were spotted by a B-17 bomber. They had been lost for three days.

Gradually, the survivors came to the realization that the clearing was not an accident. They were in a garden of sweet potatoes and rhubarb. Then they heard voices.

“The jungle rustled and shook. As the survivors stared helplessly in that direction, their fears took human form: dozens of nearly naked black men, their eyes shining, their bodies glistening with soot and pig grease, their hands filled with adzes made from wood and sharpened stone, emerged from behind the curtain of leaves.”

Would they be killed? There were some votes in that direction but the final decision was to help them. Essentially, a quarter of the way into the book, the story is over. The rest is the mechanics of rescue.

Nine elite troopers are parachuted into another part of the valley, a clearing that turns out to be a designated battlefield or no man’s land that separated the territories of the warring Logo-Mhael and Kurelu clans. The troopers are quickly surrounded by 200 armed warriors.

“Although some natives thought the visitors were spirits, others believed they were warriors like themselves who had escaped a massacre… They felt certain of one thing: the strangers were not their Kurelu enemies, so they had no immediate need to kill them.”

The three survivors were eventually rescued in a daring glider mission and returned to a heroes’ welcome in the United States. Then they faded back into obscurity. Margaret married, divorced and raised two children while working at a clerical job in Rome, New York.

Asked if she’d like to return to New Guinea, she replied: “You bet!” She died of cancer four years later.

Looking back: Prah Mongkol Visut of Phuket – a lifetime

Brand Andara and investing in Phuket