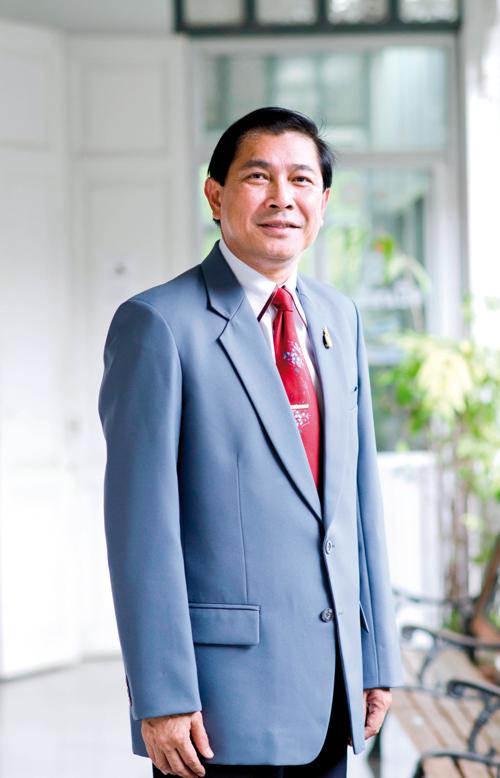 PHUKET: Governor Maitri Inthusut has just come back from a long meeting – part of the “fin free” campaign to dissuade the public from consuming sharks’ fin. The day before it was a group discussion with various government agencies on tsunami awareness and early warning systems. The whole week prior to this has followed more or less the same pattern – government and NGO meetings back to back, all to do with the welfare of Phuket and its inhabitants.

It’s late Friday afternoon when we finally sit down for our interview but even after a long day, Governor Maitri manages to look sharp and composed. His long career as a top-level civil servant has taught him to regard all problems and challenges with equanimity.

“I have come to realize that the role of the Ministry of Interior was one of peaceful resolution of all conflicts and opinions. It holds true especially in a multi-cultural society like Phuket, where values vary greatly. My job is to find a middle ground for differences so we can all co-exist and prosper together,” he says thoughtfully.

Governor Maitri, 57, was born to a family whose members served under various governmental offices and as such he is no stranger to political affairs and national or local conflicts.

After being schooled at the King’s College in Samphan, Nakhon Pathom, Governor Maitri graduated with a master’s degree in Political Science from Thammasat University. Further study at the National Defence College qualified him as a top-ranking national policy maker.

His first job as a civil servant was with the National Security Council. Later on, he transferred to the Prime Minister’s Office where he was a secretariat officer to no less than five of Thailand’s prominent politicians, including Prem Tinsulanonda and Anand Panyarachun.

He has learned much from his experience with these distinguished statesmen, who by turn brought their strong leadership qualities to bear on the nation and also on a then-fledgling officer, Maitri. But by far the most influential person in his life was his father, himself a former governor of Phrae province.

“Observing my father at work, I was inspired to follow in his footsteps and become servant to the people and to work at the grass-roots level. Now that I myself serve as governor, I realize it’s not as easy as it looks,” he says with a smile.

Phuket, says Governor Maitri, is a place with its inherent problems quite unlike others. In a province where the population is made up of many nationalities and regional variations, he believes Phuket needs a special approach to rise up to the challenges – from safety for tourists, to settlement of the Urak Lawoi (Sea Gypsies), through to the registration campaign for migrants from other provinces, and Phuket’s own environmental concerns, to mention but a few.

“We need,” he declares, “to re-design the government system from the inside out and to be more citizen-centered and get away from the kind of bureaucracy the local government used to exercise in the old days. Above all, Phuket needs professional civil servants to drive all its policies to success and fruition.”

This is where Governor Maitri’s strength and passion come to the fore. A leader who strongly believes that people are the most important resources, capable of being molded into ethical and upstanding individuals, he has taken it on himself to draw up numerous “guidelines” for local government officers to follow. The principles devised by him are based on his sharp observations and understanding of human psychology and are equally applicable to people from all walks of life whether civil servants, leaders, teachers, politicians and even villagers. In so doing, Governor Maitri hopes to inspire individuals to do their best not only for their personal growth, but also for the community as a whole.

Alongside his career as a civil servant, Governor Maitri is essentially a writer and educator, who continues to record his experiences and memories of places and people, in order to gather materials for his lifelong interest in “shaping the human psyche,” (his well-known motto: “sang kon sang ngarn,” roughly translated as “make people, make work”).

An ambitious policy by any stretch of the imagination, but as its maker, Governor Maitri believes he only has a minor role to play: “As a team player, I consider myself a quarterback feeding balls to the real shooters. As a leader though, I do have stories to tell and by writing, I leave a legacy to the next generation.”

Governor is married to Khun Pawinee Inthusut, president of Phuket Red Cross, who works as Inspector-General at the Ministry of Natural Resources and Environment. Together, the couple have one child.