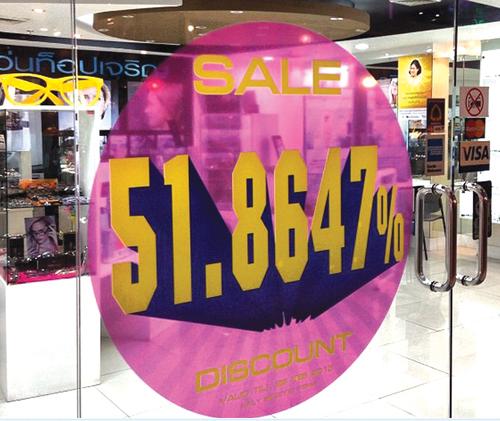 PHUKET: Economy-related matters appear to be on top of the list of concerns for today’s Asia Pacific consumers. According to the latest global survey by GfK, two in every five surveyed were worried about recession and unemployment as well as inflation and high prices, and at the same time, one in three said they are concerned about having enough money to live right and pay the bills.

While consumers in Singapore (65%), Thailand (55%), China (51%) and Indonesia (39%) expressed their greatest anxiety towards inflation, those in Taiwan (57%), Korea (51%) and Japan are mostly worried about recession and unemployment.

Meanwhile, the topmost concern of half of the Australian respondents revolved around their personal finances. Crime and lawlessness also rank among the top four worries in the region, particularly in Malaysia (67%), Vietnam (55%) and India (51%).

“Economic conditions have in most cases stabilized, but there is a significant level of uneasiness around various areas,” said Jodie Roberts, Regional Director for GfK Consumer Trends. “There are other areas which also registered significant levels of concern but only in specific countries, such as drug abuse in Thailand (55%) and Indonesia (37%), cost of healthcare in Singapore (42%), and educational quality in China (33%) and Indonesia (32%).”

GfK polled over 40,000 consumers aged 15+ across 28 countries, including 11 from Asia Pacific – Australia, China, India, Indonesia, Japan, South Korea, Taiwan, Thailand and the latest additions of Singapore, Malaysia and Vietnam. Approximately 1,500 respondents per market were surveyed on their attitudes, behaviors and values across a range of topics.

The survey also revealed that consumers have been treading carefully when it comes to their regular expenses as seen in their conscious reduction in spending on various aspects of their life. In their effort to cut costs, the first that most often will be struck off from their list of regular activities is dining out at restaurants, something which over a third (34%) of respondents said they have done in the past 12 months. Nearly a quarter (23%) also stated buying less clothing and shoes.

Along the similar theme of saving money, GfK also uncovered the prudence exercised by consumers of different countries on where to spend their cash. Respondents were given a list of money saving strategies, which included using coupons; using less or going without an item; shopping at discount stores; purchasing energy-saving products; buying in bulk to get greater discounts and switching to cheaper brands, for example; findings revealed that the Australians, South Koreans, and Taiwanese are the most careful spenders in the region as they consciously implement saving strategies. For instance, Aussies are more inclined to shop more carefully for daily necessities (63%) and postpone purchases until the product was on sale/special offer (63%); and South Koreans (73%) along with the Taiwanese (67%) have used a coupon.

“In markets like Australia where there has been some economic uncertainty – and particularly where the cost of living is so high, consumers have become a lot more cautious about how they spend their money,” said Roberts.

“An important point for companies to note is that these behaviors remain even as the economic environment improves, and thus companies which are able to deliver on value – which is not necessarily about lowest price – will benefit from this consumer trend,” Roberts concluded.

The consumer insights detailed in this article are drawn from in -depth analysis of GfK’s consumer trends study, Roper Reports® Worldwide.