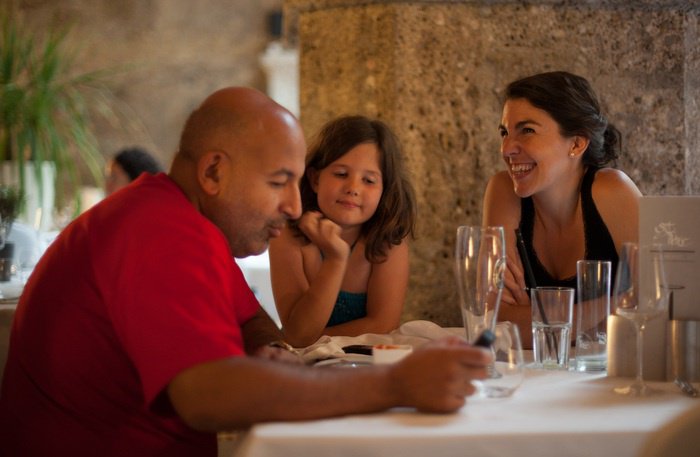 PHUKET: Ever had the unpleasant experience of seeing your dish of Pad Thai sitting at a pick-up window while your waiter spends time on his smartphone? How about lying barely clothed in a frosty room while your masseuse ‘preps’ for you by texting friends? Or maybe you’ve just gone to the local KFC with your buddies and are enthusiastically trying to tell them about a new woman you’ve met while they pay attention to a new app rather than your tale of lurid romance.

If any of these scenarios apply, then you already know about ‘phubbing’.

The word phubbing means ignoring the person you are with in favor of your phone. The concern is that our smartphones have become so much a part of our everyday lives that our real face-to-face social lives deteriorate.

The phubber phenomenon occurs when two or more people are in a social setting and interact with their mobile phone(s) and not the person, or people, they are with. We’ve all probably encountered or been a part of this phenomenon. We notice it as well when distracted drivers or pedestrians have so immersed themselves in smartphones as to disregard environmental cues to which they should pay attention.

The phubber phenomenon has become so prevalent in Thailand and around the world that it has become the subject of academic study.

A team of language experts assembled by the McCann and Macquarie Dictionary first coined the word ‘phubbing’, in 2012, as a way, they say, to help the world address a growing social problem and, at the same time, to help the company sell copies and subscriptions of their new dictionary.

But is phubbing a reflection of a world that is becoming more disconnected in which the art of conversation is disappearing? Is it a problem at all?

Is phubbing something we have a slightly disdainful attitude towards, such as seeing someone spitting would be in the West? Or has it, like spitting in China, become so commonplace as to not be even consciously registered by people?

Psychologists, who study human activity in order to understand, predict and modify behavior, are certainly interested in the question of how a phenomenon like phubbing relates to human development and would want to know whether this phenomenon is contributing to a breakdown in social order.

At first blush, it certainly seems that the act of ignoring our companions in social settings is rather antisocial and deleterious.

Deeper inspection suggests, however, that the phubber phenomenon may be a rather benign continuation of activities put in place long before smartphones became the rage. In questioning this latest adaptation, consider activities predating phubbing.

For example, groups of people have for many years gotten together to go to movies, a social activity. But then those people spend the next hour or two singularly wrapped up in the cinematic world. True, these people will often discuss the movies afterwards and they have, unlike phubbers, shared a common experience.

But families have gathered around televisions for many years, lost in their individual reveries, and the likelihood of post-TV watching discussions about what the family has viewed is minimal. Although the TV experience has been shared, no meaningful familial exchanges occur.

While psychologists have long debated the virtues and vices of the television, the general consensus seems to be that like other behaviors such as gambling or drinking, TV is okay in moderation and under appropriate conditions.

So, let’s go back to phubbing. A family or friends might be eating dinner together and all checking e-mail, texting, working apps, or discoursing with other friends. No one in the group is really harmed or excluded by such an activity, and conversations, albeit not among those gathered, are still taking place. We are indeed socializing, but on a grander scale.

Conversely, were a job applicant to disengage with a prospective boss during her interview because of a smartphone infatuation, we could certainly conclude that she had a problem, assuming she wanted to be hired.

If one of our friends were clearly bereft because of a relationship failure and we ignored his obvious distress to text an emoticon to a colleague, we might question whether we had swung on our hypothetical phubbing spectrum from amusing diversion to unhealthy addiction.

However, rather than demonize the phubbing phenomenon, we should probably draw a similar conclusion as with other potentially harmful behaviors: phubbing is okay when restrained as to the amount and occasion. And as to that waiter letting our meal get cold, a note sans tip should do the trick.

Keep it Green: Going to the zoo – part one

Close encounter with the highly beautiful