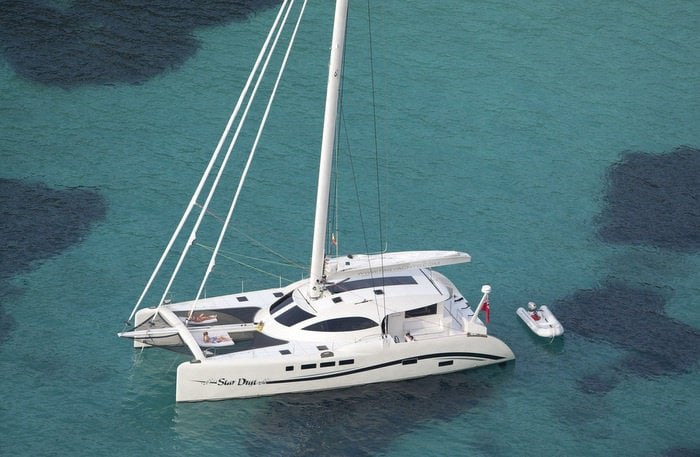 PHUKET: Looking around the marinas and anchorages of Phuket, it is apparent that there has been a significant shift in the type of boats that call Phuket home. It’s not an entirely new trend, but the move from single to multiple hulls has certainly gathered steam in recent years.

A healthy local boat building industry with a predisposition to multihulls has clearly played a role in that, but what is it that makes a multihull the boat of choice for a growing number of people?

“Because they make so much more sense than a mono in almost every regard. Space, stability, safety, they have an ideal layout for charter, easy access to water and are easy to maneuver,” says Andrew de Bruin, Multihull Solutions’ general manager for South East Asia.

Having opened Multihull Solutions’ first Asia office in 2014 in Phuket, de Bruin is confident of building on the company’s more than 10 years of success in Australia and five years in New Zealand.

“We represent a selection of quality multihull brands such as Fountaine Pajot, Privilege, Catana, Tag Yachts, Corsair and Neel Trimarans. We are also the exclusive importer for Fountaine Pajot catamarans in South East Asia and have plans to open offices in Singapore and other locations over the coming year,” he said.

A number of local multihull builders and charterers, including Asia Catamarans, Charter Catamaran, Faraway Yachting as well as the stable of Pescott-designed catamarans that have been built locally, such as the Whitehaven Series and Firefly 850s, to name just a few, have helped this multihull boom and with it the racing scene too.

Most local regattas have seen a growing number of multihull fleets competing and, with the advent of the Multihull Solutions Regatta, a new era of multihull racing was ushered onto the island.

However, it’s the charter potential of multihulls that is arguably the driving force behind more boat owners opting for multis over monos.

Phuket’s charter market is the envy of many of its regional neighbors. The cruising grounds along the Andaman coast have helped position Phuket as the marine playground of Asia and a famed charter destination globally, with multihulls now coming to the fore.

“Their practicalities lend themselves to the tropics and shallow cruising grounds,” noted de Bruin.

While Phuket’s larger charter agents still have predominantly monohull fleets, the trend to multihulls is moving apace as an increasing number of individually-owned multihulls are being offered on the charter market independently and through agents.

This increased charter interest in multihulls is, by default, driving sales. Phuket’s largest multihull purchase to date, at least in terms of numbers, was the recent order of four Corsair Pulse 600s by Krabi Sailing School. These nifty day-racers hit the water at the Multihull Solutions Regatta and Cape Panwa Hotel Phuket Raceweek this year, providing some exciting racing and a lot of fun, and are now set to become sail training vessels.

So what’s next for multihulls in Phuket and beyond?

“I see more and more multihulls in Phuket and the region, and I hope to see a change in marina layouts and charges where they are not penalized by excessive mooring charges. There have been many positives happening with Thai Customs and boat import laws in general over the last few years, and with a few more small changes, I see Phuket and Thailand in general becoming the absolute yachting hub of South East Asia,” de Bruin said.

Duncan Worthington is a long-time Phuket resident and through Infinity Communications (www.infinity-comms.com) consults to leading consumer brands, hospitality and marine clients in Thailand. In his ‘spare time’ he runs the marine portal www.MarineScene.asia. #OnDeckPhuket