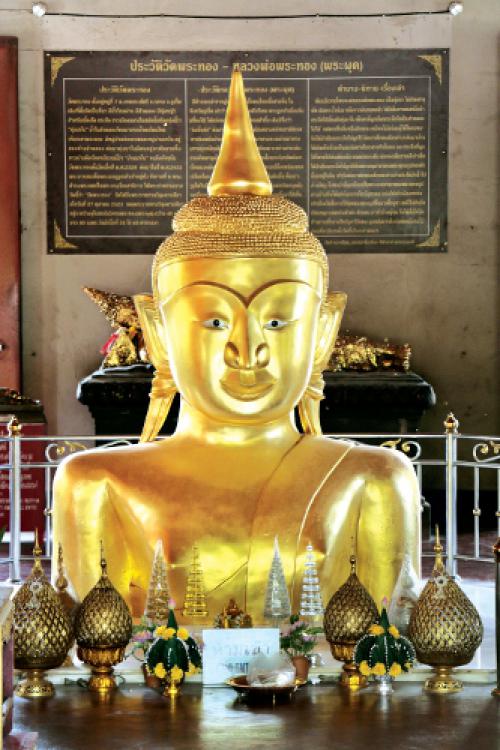 PHUKET: As I mentioned in my previous Looking Back column (story here), the Phra Phood, or the Emerging Buddha of Thalang, may have been discovered sometime in the mid 18th century by local villagers living near the town of Thalang, in the northern part of Phuket.

For generations, the people of Thalang have believed in the divine powers of the Emerging Buddha. Many stories that have emerged about the Golden Buddha statue are shrouded in legend. In the year 1809, towards the end of King Rama I’s reign, the Burmese attacked the South of Thailand once again. They reached Thalang and sacked the town. When they conquered Thalang, the Burmese looted everything of significant value and burned the rest. They soon came across the revered Emerging Buddha outside of the town.

Seeing that it was made of gold, the Burmese were determined to take the statue back with them. But as the soldiers dug around the statue to uncover the lower half, again massive numbers of wasps, locusts and red ants began emerging from the disturbed ground and attacked the diggers. Many hundreds of Burmese soldiers were stung by the insects and were forced to abandon the digging. It is said that the soldiers that were stung later became critically ill and many died of fever.

Determined to take the statue home with them, the Burmese began using fire to smoke out the ants and wasps from around the statue. However they were not able to recover the Buddha statue since a few weeks later, a Thai army from Nakhon Sri Thammarat arrived in Phuket drove the invading Burmese out of the island.

Many years later, a monk from Sukhothai called Luang Por Singha travelled to Thalang and came across this peculiar half buried Buddha statue. Because it was made of gold, the monk was afraid that thieves might be able to saw off the Buddha’s head easily. He urged the locals to build a temple at the site where the Buddha was located.

The locals of Thalang heeded his advice and built the “Temple of the Golden Buddha” at the site. They built a chapel around the Emerging Buddha and declared it the principal Buddha image of the temple. Luang Por Singha was appointed the temple’s first abbot.

Many years later during his tenure as abbot, it is said that Luang Por Singha sculpted an eerie riddle on a scroll, which translates roughly as follows.

“Shrugging three or four times, bearers bring ghosts to burn. The ghosts that have not yet decomposed, their fragrance can be smelled from afar”.

When he died, he passed on the riddle scroll to his successor, with a condition that the new abbot must unlock the meaning of the riddle. If he cannot do so, he will not be able to stay at the Temple of the Emerging Buddha for long. As time went by, Luang Por Singha’s successor was not able to crack the riddle. True to his prophecy, he did not remain the abbot of the temple much longer. Each successive abbot that followed him was not able to crack the riddle either, and they too were not able to stay at the temple for long. In time the temple’s eerie reputation began to spread as a temple that “ate its abbots” and no monk was willing to take up residence there. The temple began to fall into disrepair and became abandoned.

In the year 1897, a monk named Phra Kru Jitthasomanwat of Phra Nang Sang Temple in Thalang was able to crack the infamous riddle. He then asked for the Temple of the Golden Buddha to be renovated and volunteered to become its 15th abbot. He remained the temple’s abbot for 61 years, proving that his solution to the riddle was indeed correct.

Phra Kru Jitthasomanwat explained that Luang Por Singha’s riddle was referring to the tradition of cremating deceased Chinese monks using scented wood, such as Sandalwood. The “shrugging bearers” referred to the bearers of a palanquin, as they moved a few steps forward and a few steps backwards. The “ghosts” in this case were the scented woods inside the palanquin that would have to be burned with the deceased. “The ghosts that have not yet decomposed” referred to the scented woods that were not yet burned. “Their fragrance can be smelled from afar”, referred to the fact that when such palanquins carrying scented woods passed by, the strong scent of the wood inside would diffuse across a great distance.

After the riddle of Luang Por Singha was solved, the Temple of the Emerging Buddha was restored and became a thriving center of worship for the people of Thalang once again. In the year 1909, King Rama VI, at that time still the Crown Prince of Siam came on a state visit to Phuket Island. During the trip, he visited the Emerging Buddha statue and royally bestowed the temple its existing name, “Temple of the Golden Buddha”.

Despite its long history, no one knows for sure where the Emerging Buddha originated from or who sculpted it. But one of prevailing theories among many Chinese people is that the Emerging Buddha was actually sculpted in China many centuries ago. Known in Chinese as Kim-in-jor, it is said to have resided in a temple in Shanghai. During one of the wars between the Tibetan Empire and the Chinese Tang Empire in the 7th century AD, Shanghai was attacked and captured by the Tibetans. The Tibetans found the golden Buddha statue and decided to load it onto a ship and transport it elsewhere. During the journey, a storm broke out and sank the ship.

The golden Buddha image was never recovered, but many Phuket locals of Chinese origin believe it was washed ashore in Thalang and sank in mud, never to be found again until centuries later. Till today, many Chinese locals in Phuket highly revere the Emerging Buddha image and every year, during important Chinese festivals like Chinese New Year, Chinese locals of Phuket would flock to the Temple of the Golden Buddha to worship the sacred golden image.