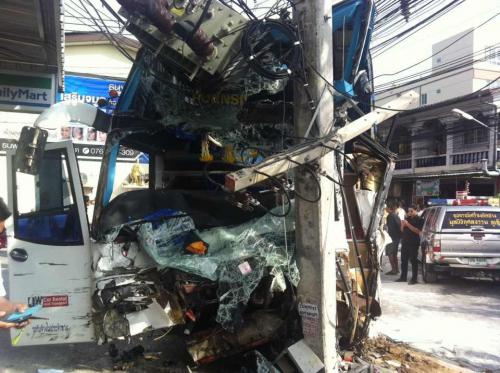 PHUKET: The Phuket Highways Office has secured 10 million baht to widen the road at the bottom of Patong Hill in the hope of preventing further fatal bus crashes caused by brake failure.

The announcement follows a runaway tour bus slamming into five vehicles, including one motorcycle, killing two people and leaving 26 others injured on December 29 (story here).

The bus, loaded with Russian and Thai tourists, stopped only after ramming a concrete barrier and hitting a power pole in front of Wat Suwankiriwong (map here).

“We have drawn up a plan to expand the road from three to four lanes. This should help traffic flow and reduce the need for drivers to use their brakes so much,” Phuket Highways Office Director Samak Luedwonghad said.

“We already have the 10-million-baht budget required. The construction plan has been submitted to the Ministry of Transport in Bangkok and is expected to be approved in March,” he added.

The project will see 500 meters of Phra Barami Road expanded to four lanes, starting in front of the abandoned Crest resort and ending at the junction in front of Patong Temple.

“The road expansion will take 150 days to complete. We will expand it while we install larger drains along the roadside so both projects can be finished at the same time,” Mr Samak explained.

However, Mr Samak admitted that little more could be done to make the road safer.

“There is not enough room to reduce the incline of the descent into Patong. If you want to make driving into Patong safer, I recommend we build a tunnel through the hills as soon as possible,” he said.

“Some people will be negatively affected by such a project, but it will help save lives,” Mr Samak noted.

The horrific bus crash before New Year’s Eve prompted Governor Maitri Inthusut to call on the Phuket Land Transport Office (PLTO) to draw up a list of suggestions to prevent more fatal accidents from occurring on the notorious hill.

“Over the years, there have been many accidents on Patong Hill involving buses or trucks that have had brake failure. These accidents have cost many lives,” Mr Jaturong said.

Among the suggestions was the idea to ban all buses and trucks travelling over Patong Hill at all times and to transfer passengers to and from Patong by van. Another suggestion was to set a maximum age for all heavy vehicles travelling over the hill.

Governor Maitri led officials on an inspection of the site on January 3 to evaluate the efficacy of the nine suggestions.

“We will now raise our ideas with business owners to see if they have any valuable suggestions,” Mr Jaturong said yesterday.

“They might have different ideas from their experiences to share with us so we can prevent any further accidents from happening,” he said.