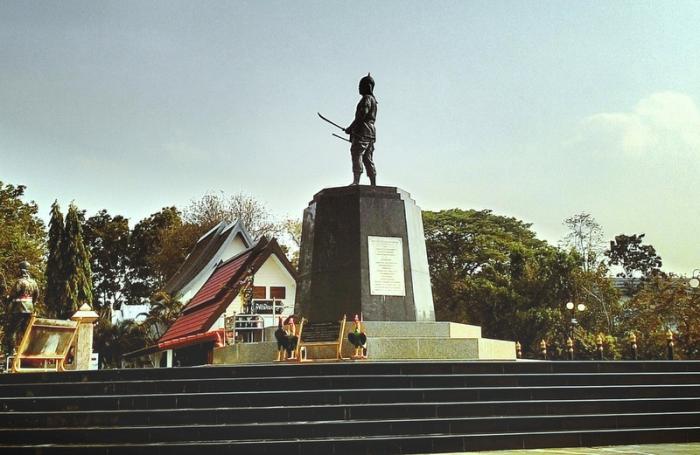 PHUKET: During the late Ayutthaya period, around the year 1750, there lived a boy named Joi in the district of Pichai. His father was a farmer and often tasked him with taking care of the family’s buffalo. Joi was intelligent and fearless. Although slightly small in stature, he was not easily intimidated and often got into fights with bigger kids. He loved boxing and martial arts.

When Joi was eight years old, his father sent him away to Mahathat Temple in Pichai for his education. At the temple, he was taught to read and write by the abbot. Every day after his classes, Joi would practice Thai boxing by using a banana tree’s trunk as his assault target and by kicking tiny lemons suspended from a branch. His passion for Thai boxing was unparalleled.

One day, the governor of Pichai visited Mahathat Temple with his son. The governor wanted the abbot to educate his son along with the other boys, to which the abbot agreed.

Joi and the governor’s son did not get along however. One day a fist fight broke out between the two boys. Joi ended up beating the governor’s son to the ground. Afraid that he would get into a lot of trouble, Joi ran away from the temple.

He wanted to go to Thasao, where there was a famous Thai boxing camp, to learn Thai boxing from the masters there. On the way, however, he met a Thai boxing master named Thiang, who agreed to train him as long as he was willing to help him with various chores. Seeing that this was a new life for him, Joi changed his name to Thongdee.

By the time he was 18, Thongdee was an expert boxer. He began to teach students and take part in competitions. One day, a Chinese traveller on his way to Tak province stopped by Thongdee’s camp. When he observed Thongdee’s skills, he was very impressed. He told Thongdee that Phraya Tak Sin, the governor of Tak, was also passionate about Thai boxing. He invited Thongdee to visit Tak and promised to introduce him to the governor, to which Thongdee agreed.

Phraya Tak was very impressed by the young boy’s talent. He promised to take Thongdee into his service.

Thongdee was grateful for the opportunity to serve under the governor. A young, hardworking man with integrity, he soon became one of Tak Sin’s favorite officers. When Thongdee was 21 years old, Phraya Tak bestowed upon him the title of Luang Pichai Asa. Thongdee was now responsible for training Phraya Tak’s soldiers.

In the year 1766, Phraya Tak received a royal degree from King Ekkathat, which elevated him to Lord of Kamphaeng-phet. However before he could be properly vested in this new position, the Burmese invaded Siam.

Siam under King Ekkathat was in turmoil. It had lost control of most of its vassal cities. The king seemed more interested in his luxurious lifestyle than political affairs. A Dutch source even said that the Siamese court was on the verge of bankruptcy. When the Burmese invaded in 1766, they easily subjugated city after city in Siam until they finally reached Ayutthaya and laid siege to it.

Outnumbered and unprepared, Ayutthaya was in grave danger. King Ekkathat desperately tried to counter the Burmese army, but the Siamese were easily crushed.

Finally, King Ekkathat called upon Phraya Tak to come to Ayutthaya’s rescue. He wanted Phraya Tak to lead his troops and attack the Burmese army laying siege to the capital.

Phraya Tak, however, knew that this would be nothing short of a suicide mission and that Ayutthaya was beyond rescue. He had no choice but to let fate take its course.

On April 7, 1767, Ayutthaya fell. The Burmese looted and plundered the golden city. Any movable valuables were taken back to Burma and the rest torched. It was one of the darkest hours in the history of the Siamese people.

On Deck: Lessons from the Top of the Gulf Regatta