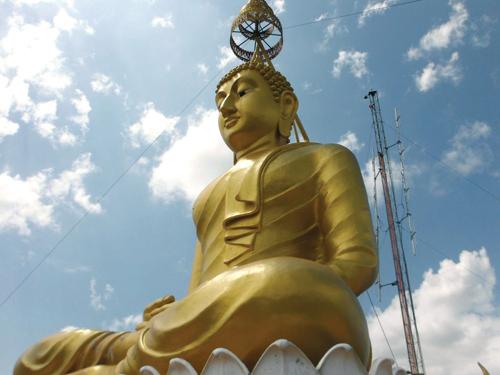 PHUKET: The island’s ever-expanding traffic makes cycling trips off Phuket all the more enticing. This week, we join Amazing Bike Tours for their three-day adventure to get away from it all by “Krawling Around Krabi”.

Amazing Bike Tours is an innovative company that lives up to its inspirational name by providing exciting, well-managed and good value group cycling tours, not only around Phuket itself but into the less turbulent cycling territories around the region.

It was already heating up to be a blistering hot March morning when their big white people-mover hove into view, emblazoned with its hugely-visible advertising for an Amazing Bike Tour.

Big white vans are about as common in Phuket as men wearing stilettos, but this one was immediately recognizable because of the array of swaying mountain bikes perched precariously on its roof.

Loading my own trusty and slightly rusty wheeled steed onto the roof, we were soon away up the island, collecting a motley crew of Lycra-clad cycling enthusiasts of varying nationalities and vintages along the way.

At Bang Rong’s east coast pier, our bikes were man-handled onto the waiting longtail boat ferry and in a trice we blasted off into the heat haze for the hour’s crossing to the Koh Yao islands.

Koh Yao Noi is a parallel universe of quietude, laid back Muslim villages and steamy rubber tree groves surrounded by stunning views across Phang Nga Bay’s karst topography. James Hembrow, the MD of Amazing Bike Tours, told us that if we saw ten cars during our day’s ride around the quiet island roads, we’d had a “busy day.” We saw eight!

Our first night’s billet was at excellent beachside cottages on the island’s east coast, where, after wolfing down seafood and cold beers, we ended up swinging in hammocks on the beach watching the squid boat lights dance on the horizon until bed claimed us at 10pm.

Day two began with a hectic post-breakfast ride to catch a 9am longtail ferry across the rest of Phang Nag Bay to a little pier north of Krabi Town. There we were picked up by our white people-mover with bike rack, which had magically re-appeared to meet us. We drove about an hour to the signposted turning off the main Trang Highway 4, which led via a 20 kilometer ride along quiet back roads through the Sra Morakot sub-district east of Klong Thom, to the Emerald Lake.

This dazzlingly green freshwater pool was reached by a hike through the hot woods along a wooden walkway that follows and then bridges the cascading stream. During the walk you might spot the rare Pitta Gurney birds thought to be extinct until they were discovered solely in this forest 15 years ago.

Arriving poolside there were plenty of tourists on hand, plus a coterie of venerable Thai ladies taking the waters, and so we dispensed with our sweaty Lycra and plunged into the refreshing pool to join them for an hour’s frolic followed by a Thai lunch nearby.

Mid-afternoon saw us rather reluctantly creaking along further steamy back roads to the Klong Thom hot waterfalls, which we reached via another short forest hike through the national park.

Here there were several levels to the falls with attendant pools in which to soak in the 37 to 39 degree waters of the mineral-laden spring. It was a perfect hydrotherapy bath and had the amazing effect of removing every bodily ache and pain from our day’s riding. After a huge seafood dinner and a few cold ones near our hotel in Ao Nang that evening, it was perhaps no surprise that the ‘arms of Morpheus’ again claimed us by about 10pm.

Day three of our adventure started with some not particular pleasant main road riding out of Ao Nang up to Highway 4 and south-east towards Krabi Town itself. We stopped at the huge reclining roadside Buddha at Wat Sai Thai for a drinks break and then things became more interesting as the cliff-top temple of Wat Tham Sua (the famous Tiger Temple) hove into view near Ban Phanumat.

After a few more kilometers we reached our prize – Wat Tham Sua – one of the most famous temples in Southern Thailand. It is located on top of a rocky limestone karst about eight kilometers northeast of the Krabi Town.

As we walked into the temple compound, we spotted the huge stupa on the right with steps leading up inside, but this was NOT the Tiger Temple!

This was at the top of a near vertical mountain some 300 meters up a vertiginous cliff. There is a stairway with some 1,237 steps, which one has to climb in order to see a tiger’s footprint within the Buddhist monument on the top. After the morning’s cycling, this of course offered us the opportunity for a sensational burst of masochism, which we exuberantly seized.

Forty minutes later we breasted the apex and were rewarded with stunning 360 degree views of the region we had cycled through in a fitting climax to our amazing Krabi adventure.