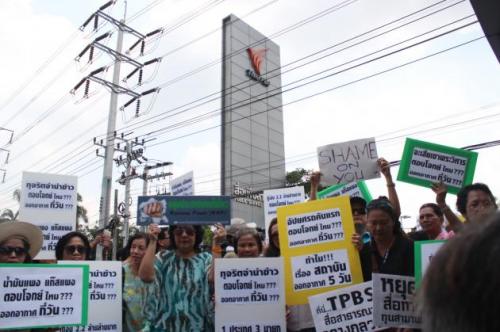 
House panel wants to hear from DSI chief again over ‘men in black’
The Nation / Phuket Gazette
PHUKET: A House committee yesterday unanimously resolved to summon Department of Special Investigation chief Tarit Pengdith to repeat his statement to the committee about the operations of the so-called “men in black” during the 2010 political riots.

Democrat party-list MP Watchara Petthong, chairman of the House Committee on Political Development, Media and Public Participation, said the committee had taken recourse to the Summons of House and Senate Committees Act 2011 to summon Tarit to give his statement again.

The committee also resolved to file a complaint with the Justice Ministry over Tarit’s casting doubt on the panel’s authority to question him. Tarit said the works of the DSI and the now defunct Centre for the Resolution of the Emergency Situation are protected under the Information Act 2007.

The committee said Tarit also walked out of the previous committee meeting without showing proper respect and cooperation. It said his actions were in violation of Article 135 of the Constitution.

The committee called on the ministry to order Tarit to give a written answer about his assessment of and objections to the committee’s authority.


Thai PBS attacked for telecast of Tobjot final programme
The Nation / Phuket Gazette
PHUKET: Demonstrators rallied outside the Thai Public Broadcasting Service (Thai PBS) yesterday, demanding resignation of the station’s management that allowed the airing of the fifth and last episode of the Tobjot programme which debated the Thai monarchy.

Calling themselves “People who cannot tolerate”, 100 people led by a woman calling herself “Black Coffee” called on Thai PBS director Somchai Suwannaban to resign and take responsibility for broadcasting the last episode which she claimed caused many Thais to get upset by the show’s content.

They demanded the Thai PBS management apologise to the whole country and threatened to take legal action if their demands were not met.

The group claimed to be the same that had earlier successfully called for suspension of the last episode of the programme that was to have aired on Friday. They said they disapproved of the programme on the grounds its content implicated the much-revered high institution and would result in political conflict and national division.

The group said the programme was liable for violating Article 37 of the Broadcasting and Television Act 2008 which bans content viewed as an attempt to bring down the country’s constitutional monarchy or has content that adversely affects national security.


Mae Hong Son wins happiness poll
The Nation / Phuket Gazette
PHUKET: Mae Hong Son residents are the happiest in the country and Bangkokians are the least happy due to stress caused by materialism, a high crime rate and bad family relationships, according to an Abac poll.

The poll was released to mark the first International Day of Happiness yesterday.

The Academic Network for Community Happiness Observation and Research, or Anchor, which works out of Assumption University, surveyed 12,429 people in 18 provinces between March 1 and 19.

They measured people’s “happiness” based on 17 indicators based on scores of 1 to 10 points and found that general happiness had shrunk from last December’s score of 7.61 to 6.58 now.

Happiness rankings among those living upcountry in percentage terms revealed that the happiest province was Mae Hong Son at 60.9 per cent followed by Phang Nga at 60.7 per cent, Chaiyaphum at 60 per cent, Prachin Buri at 57 per cent and Uthai Thani at 56.6 per cent.

The key factors for happiness in the top five provinces were: the natural environment, rural lifestyle in peaceful city, small society with good relationships in family and community, high safety in terms of life and property, low crime rate, pride in local history, little to moderate urbanisation and materialism and, more importantly, loyalty to the nation, the religion and the monarchy, which boosted feelings of unity.

Bangkok ranked last at 20.8 per cent after Samut Prakan at 22 per cent and Phuket at 24.2 per cent. These provinces were least happy because of high urbanisation and materialism, high crime rate, relationships in family and community being in crisis, drug and alcohol problems, disunity and bias in society, hot tempers and lack of trust in government and local administration due to a lack of transparency. Pollution and health problems also made the list.