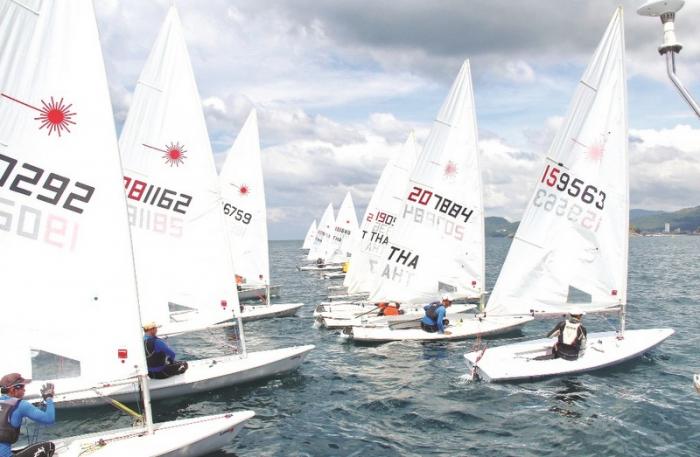 His Majesty the King was a passionate sailor and created yachting history in 1967 when he and his daughter Princess Ubolratana Rajakanya won a gold medal in the OK dinghy class at the 4th Southeast Asian Peninsula Games. Each year, a personal representative of His Majesty presents the trophies to all the winners of the annual King’s Cup here in Phuket.

The regatta brings together the best of the region’s sailing community: the organizing committee led by Kevin Whitcraft; race officer Simon James and competitors from around the world.

“This year is the 30th Anniversary of the Phuket King’s Cup Regatta, and it’s been amazing for us to see it grow from a small seed back in the late eighties to bloom into the best regional regatta. We’re delighted to be able to enhance sailing and marine tourism in Thailand,” said Mr Whitcraft.

The Phuket King’s Cup has always sailed under the direction of the RVYC, with extensive logistical help from the Royal Thai Navy and support from the Yacht Racing Association of Thailand (YRAT) along with provincial authorities.

The five-day race program starts with a sail past in honor of the birthday of His Majesty the King. A procession of boats passes the Royal Thai Navy vessel HTMS Klaeng, stationed off Koh Pu, each saluting an image of His Majesty.

A variety of downwind and round-the-buoys races and a popular scenic island passage race provide suitable challenges for the many competing divisions, including racing, cruising, performance cruising, multihulls and classics. The regatta also has a very strong youth dinghy fleet that it supports with a year-round racing series to help foster the long-term appreciation of sailing in the Kingdom.

The regatta now ranks along with the Caribbean’s Antigua Race week and Australia’s Hamilton Island Regatta.

Phuket has become a Mecca for sailing enthusiasts and emerged as Asia’s premier marine leisure destination.

The 29th King’s Cup saw 89 racing yachts divided into 14 classes, 60+ dinghies and over 1,500 sailors competing from 18 countries. Sarab Jeet Singh, skipper of Windsikher II, won the premier racing division (IRC Zero) and is eager to defend his title this December.

The Kata Group of Resorts has been host to the event for many years, and will continue to do so again this year, December 3-10.

The Phuket Gazette and its television arm, PGTV, will likewise continue as media sponsor for this prestigious regatta in 2016.

Locals, tourists team up to clean up