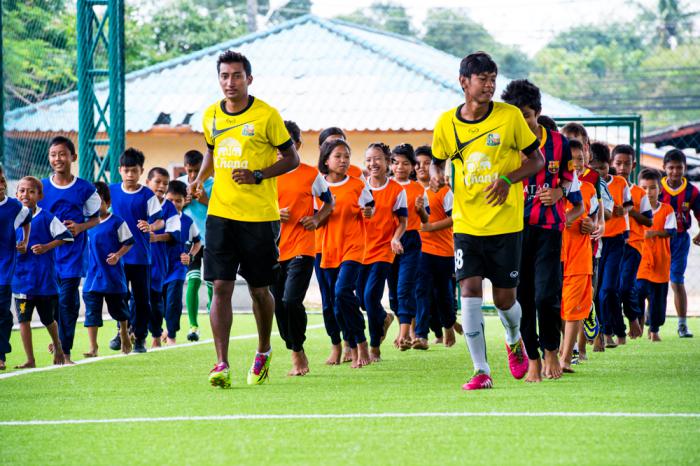 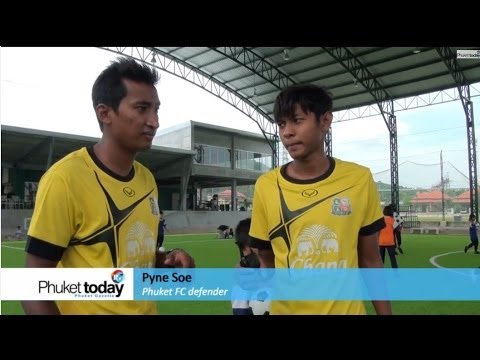 The event was a cooperative effort between Phuket FC fan club the ‘Mushy Peas’, and the Grumpy Old Man’s Society (GOMS) in conjunction with the Good Shepherd Learning Center and Phuket FC.

The 40 students from the Phuket Town based school, which has about 150 kids enrolled, are primarily the children of laborers from Myanmar who have come to work in Thailand.

The children were led by four members of the Phuket FC team for a stretching and warm-up session, football handling drills and friendly team competitions. The kids were clearly ecstatic to be out on a field trip and were quick to engage with the players.

The players, including Myanmar national Pyne Soe, participated as part of their community outreach obligations, and the 27-year-old defender was able to talk and joke with the group in their native tongue, serving as a positive role model for the underprivileged kids.

GOMS member Simon O’Herlihy attended the event at Republic Phuket to lend a hand. He explained that although GOMS has served as a resource of information to share among members since its inception in 2009, the group’s primary goal is to raise money for various charities. Meetings are held twice a month and they donate 200 of the 250 baht dues to local charities.

“For a lot of people, like myself, who are retired here, it really gives you some motivation to get involved,” said O’Herlihy. “I think it is rather sad to see so many capable expat guys who could be giving a bit back.”

GOMS has helped organize several fund-raising events which have benefited various schools and orphanages, but O’Herlihy explained, “We have probably worked with this school more than any other. When I first went to visit the school, it was about two years ago. They had a school at Rassada port that was just breeze block, chicken wire for windows and a corrugated tin roof.”

Since then, many organizations and individuals pitched in to raise enough funds to build a new facility for the children. In December, 2013 the Good Shepherd Learning Center was opened and provides a modern and safe facility for the students.

Good Shepherd teacher and volunteer Carol Goodison served as one of the chaperones for the kids on the field trip. Visiting from Ireland, Goodison is in Phuket for a six-month community service project until June.

The Rawai based Phuket FC fan club, the Mushy Peas, also helped to coordinate the event and donated funds which went to purchase new shoes for the children. Excited, smiling kids gathered around Mushy Peas member Richard Dill as he passed out shoes to the kids. Amidst a frenzy of flying boxes and shoe laces, every available adult helped the kids get into their shoes so they could run onto the field to try them out.

“This is such a win-win situation for everybody, but mostly for the kids. It’s such a great thing to get them out of the school,” said O’Herlihy. “When you see the look on their faces and you see how they are enjoying themselves… it’s fantastic.”

All tied up: The art of cowboy rope tricks