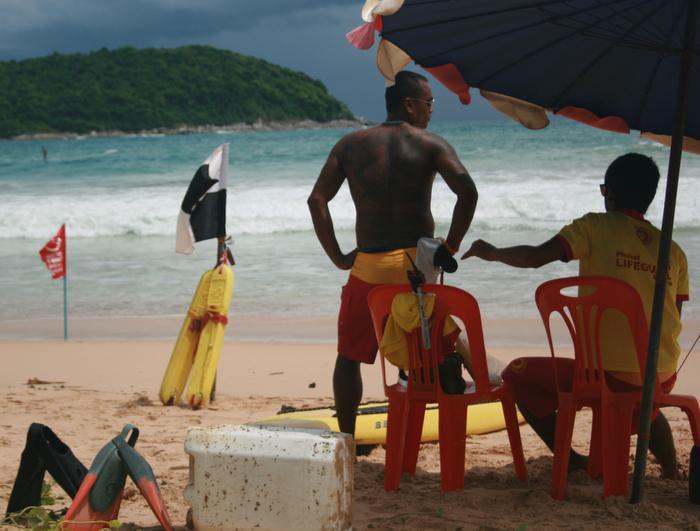 “Since the contract has ended, it is no longer our responsibility to patrol the beaches. All 108 lifeguards have quit their jobs,” Phuket Lifeguard Club President Prathaiyut Chuayuan told the Phuket Gazette this morning.

“I have no idea what will happen if someone gets into trouble while lifeguards are not there to help.”

Nararit Touyon from the PPAO Tourism Department said that he was unaware of any backup plan to ensure the safety of swimmers as the sea surrounding Phuket becomes more dangerous with the onset of the Southwest monsoon season.

“We must find lifeguards to look after the beaches as soon as possible. We know how important it is to maintain safety for swimmers,” Mr Nararit said.

The PPAO will hold an auction for the contract, said Mr Nararit.

Though the wheels are in motion to invite interested parties to bid for the contract, an auction date has yet to be set.

“This is the third time we have opened bidding for the budget. The first time, no companies came forward. The second time, the Phuket Lifeguard Company applied. However, the renewal has fallen through,” said Mr Nararit.

“If we cannot come to an agreement with the Phuket Lifeguard Club, and if no other company comes forward to bid on the contract, it is up to PPAO Vice President Soratham Jinda to determine the next step,” said Mr Nararit.

The Gazette was unable to reach Mr Soratham for comment.

Despite a 10-per-cent increase from the previous budget (story here), Mr Prathaiyut held firm to his desire to increase salaries for his staff without cutting the number of guards that patrol the island’s beaches (story here).

“I am now waiting to see if the PPAO will call and re-negotiate with us,” added Mr Prathaiyut.