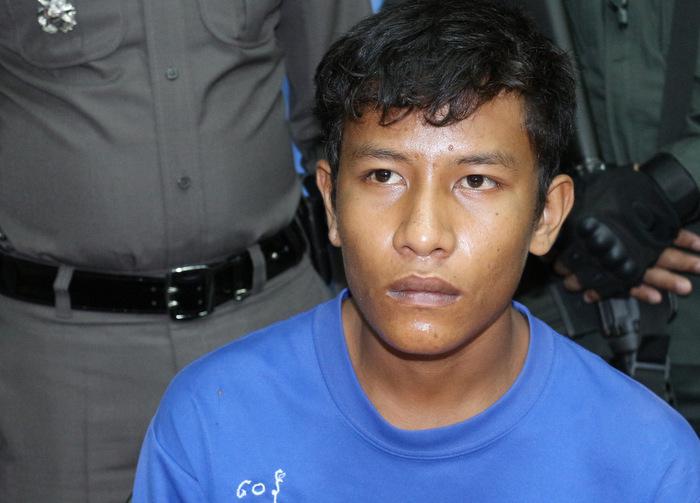 The body of Mr Boigeol, 37, was found in a pool of blood partially under a mattress in a room at the Moragot Resort, located off Saiyuan Road in Rawai, on April 18 (story here).

Officers found Mr Shwe in possession of items stolen from Mr Boigeol, as well as other items, including a camera, a mobile phone and money stolen from another room at the resort, the general added.

“Maung Myo asked me to go with him on that day. We started stealing things from room number three, then we went to room number five. The door was not locked,” Mr Shwe said.

Mr Maung had been insulted by the Frenchman in an encounter before April 18 and was still enraged, Mr Shwe explained.

“It made him so angry he wanted to kill the Frenchman. He hit him at the base of the ear with a piece of wood while he was sleeping.

“I tried to tell him to just hit him, but don’t kill him, but he hit him two more times after the Frenchman fell from the bed to the floor.”

After ransacking the room, Mr Maung gave Mr Shwe a camera and the pair fled the resort, Mr Shwe said.

“After I heard that the Frenchman had died, I hid at my friend’s house in a rubber plantation,” Mr Shwe said.

Mr Shwe has been charged with theft and murder, Gen Ratchata confirmed.