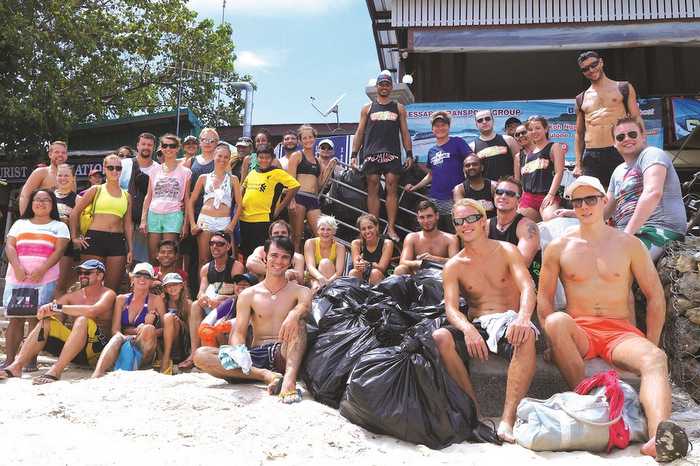 PHUKET: If you have been to a Phuket beach or beneath the Andaman Sea’s surface, you’ll know that discarded plastics are constantly present. Hardly a month goes by without a dive company, resort or local “green” group calling on volunteers to bag beach rubbish.

Some groups, such as Clean The Beach Boot Camp, have regular campaigns to rid the beach areas of plastic that washes up from the sea – yet there seems to be no way to stem the constant flow of it onto our shores, which shouldn’t really come as a surprise.

For more than two decades, we have known that dense collections of plastics are creating floating islands of rubbish the size of European countries at gyres – areas in the sea where currents converge. Now, though, researchers are getting a much better sense of the size and scope of the problem.

A study published recently by PLOS ONE revealed that an estimated 5.25 trillion pieces of plastic, weighing 269,000 tonnes, can be found throughout the world’s oceans.

“Plastic pollution is globally distributed across all oceans due to its properties of buoyancy and durability, and the sorption of toxicants to plastic while travelling through the environment have led some researchers to claim that synthetic polymers in the ocean should be regarded as hazardous waste,” the report said.

“Through photodegradation and other weathering processes, plastics fragment and disperse in the ocean converging in the subtropical gyres. Generation and accumulation of plastic pollution also occurs in closed bays, gulfs and seas surrounded by densely populated coastlines and watersheds.”

In 24 expeditions between 2007 and 2013, samples were collected by net towing, as well as visual survey transects of large plastic debris. Then, through computer modeling, the research team was able to estimate the amount of plastic in the world’s oceans.

However, the report cautioned that the estimates were highly conservative and didn’t account for potentially massive amount of plastics present on shorelines, on seabeds, suspended in water columns and within organisms.

“The impact of plastic pollution through ingestion and entanglement of marine fauna, ranging from zooplankton to cetaceans, seabirds and marine reptiles, are well documented. Adsorption of persistent organic pollutants onto plastic and their transfer into the tissues and organs through ingestion is impacting marine megafauna, as well as lower trophic-level organisms and their predators,” said the PLOS ONE report.

Phuket diners digging into their tuna, barracuda, shark or other tasty marine creatures should take pause right about now. You might not consider yourself a predator, but you do the eating portion of the job.

“Plastics are like a cocktail of contaminants floating around in the aquatic habitat,” Chelsea M Rochman, a marine ecologist at the University of California, Davis, told The New York Times. “These contaminants may be magnifying up the food chain.”

Marcus Eriksen, the leader of the research effort, explained to the Times that the scope of the problem makes floating garbage collection impractical.

“We’ve got to put some onus on producers,” Dr Eriksen said. “If you make it, take it back, or make sure the ocean can deal with it in an environmentally harmless way.”