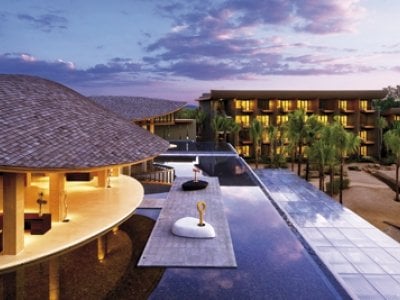 Wikipedia describes it as: “A proactive, strategic, visitor-centered approach to the economic and cultural development of a location, which balances and integrates the interests of visitors, service providers, and the community.”

Despite its wordiness, this pretty much sums up what destination marketing is all about.

For those not in the business (or perhaps slightly hungover) I implore you to take a moment to read it over again… very slowly.

Modern language dictates the use of acronyms, so with this in mind, destination marketing organizations can be readily referred to as ‘DMOs’. Now, isn’t that nicer and tidier? (And almost worthy of a rap group name?)

Looking north – not to Alaska or the North Pole, but up to Mai Khao Beach – we can see a DMO beginning to take shape.

It’s here that four of the island’s leading hotels – JW Marriott, Anantara, Renaissance and Sala Phuket – have teamed up for a joint-venture marketing initiative.

It’s a bit like the island’s economic engine, tourism itself, humming away while a rugby scrum evolves for those looking to increase tourist numbers to their resorts.

Perhaps those clever people at Laguna Phuket, K.P. Ho and former Managing Director James Batt, were ahead of their time when setting up a destination marketing outfit several years ago.

At Laguna, Debbie Dionysius and her team have done the island proud with marquee events, including the annual triathlon and recent Ironman 70.3.

Of course big business is not a charity and Laguna has many rooms to fill, so the synergy surrounding these events increases the commercial opportunities involved for the hosts.

Taking a step back from our angst-filled lives, highlighted by petty jealousy, personal conflict and business wars, for a moment, it cannot be denied that these big events benefit Phuket on a much broader scale than just the organizers’ own self interests.

‘Brand Phuket’ remains a large fish still to be reeled in, and sometimes the voyage home takes the co-operation of different parties to land a trophy.

It was also a signal of intent and a confirmation, sent south to Laguna, Kata/Karon and even over to Cape Panwa, that event-based tourism remains a team game.

The fact remains that it’s the private sector that must be brand champions for Phuket’s tourism market.

The task of drawing visitors to the island, entertaining them and inspiring them to return, is not an easy one. And the new northern resort group have set the bar just a bit higher – and hopefully more events will find a home in Phuket.

This article was contributed by Bill Barnett, Managing Director of Phuket’s c9 Hotelworks. He can be contacted through www.c9hotelworks.com.