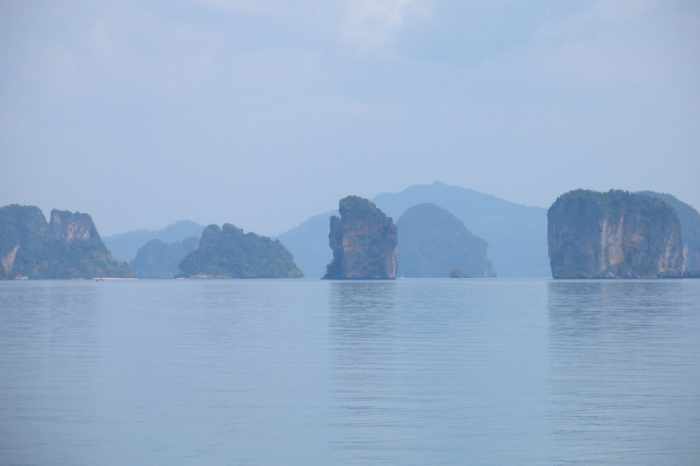 PHUKET: I recently flew from Bangkok to Phuket. Soaring high above this city of 12 million souls, a sprawling conurbation of concrete buildings, bisected by modern expressways and crisscrossed by venerable canal systems, we headed out toward the Gulf of Thailand where the black waters of the Chao Phraya river disgorge into the blue sea. Blue only until you looked down to where the estuary met the ocean.

There, in a huge arc, was an insidious, brown-black stain spewing far out into the bay. Less dramatic, but nonetheless evident as we headed south was the human impact on the shoreline – sparse colonies of mangrove a stark reminder that most of this natural and richly bio-diverse barrier twixt sea and land had gone, a victim of human encroachment at the ocean’s edge and a continuing problem on Phuket’s eastern littoral. And while here the sea was not stained the color of deep ocher, there was a telltale band of brown, polluted water bordering these coastal communities.

Only where there was no evidence of human habitation was the seat its cerulean best: no discharge of wastewater, no irrigation systems leaching waterborne chemicals into the ocean and causing eutrification and worse. People equals pollution.

As we moved south past Hua Hin, the landscape greened perceptibly – for this is an area of heavy rainfall – with hills clad in evergreen trees, looking for all the world at 35,000 feet like florets of broccoli. Only one disturbing note: in places, the uplands had been gouged by quarrying, leaving bare red scars on the lush woodland.

How much more pleasant to drive past a section of motorway where avenues of crape myrtles, cork trees and alstonias were still very much in evidence, graceful reminders of an older and more eco-friendly vision. Photo: Gangulybiswarup

Flying directly south, we passed Koh Samui and its smaller companion Koh Pha Ngan, both shrouded in cotton-wool, cumulus clouds, crossed the mainland and began our descent over Ao Phang Nga. This spectacular bay is surely one of the natural wonders of the world: forty or more verdant islands, many of them limestone karsts with precipitous cliffs miraculously topped by trees, dotted randomly in the translucent ocean. In the shallow waters nearby were areas where the pristine sea revealed the presence of coral colonies, while the beaches and coves were fringed by trees, the last remaining outposts of primary mangrove swamp in the whole of Thailand. Touchdown took us past floating villages and oyster farms, rectangular shrimp ponds and rows of casuarinas.

On terra firma and driving south, I noticed how the sugar palms, which had long since replaced the flowering crape myrtles and millingtonias, still dominated the median strip. But past Thalang, many of these palmyras were struggling: brown, sere fronds and stout, knobbly trunks with only a defiant sprout of leaves at the top of the tree. Some, presumably already dead, had been removed. One could only conjecture that here, faced with much denser traffic and a hostile atmosphere, they had been unable to contend with the unremittingly high levels of exhaust fumes. How much more pleasant to drive past a section of motorway where avenues of crape myrtles, cork trees and alstonias were still very much in evidence, graceful reminders of an older and more eco-friendly vision.

Both a blessing and a potential curse, cash crops represent, for this environmentalist at least, the lesser of two evils. Photo: asano

In the roadside fields were rubber plantations. Since the tree’s introduction to Thailand in 1899, most of Phuket’s cultivated land has been gradually given over to hevea brasiliensis and the production of latex. Although the groves of young rubber trees still had pineapples beneath their branches, another “outsider” cash crop was discernible beside the motorway: a huge plantation of oil palm saplings (elaeis). Rubber trees came originally from the Amazon rainforest, oil palms from Africa. It just shows how suited the Phuket climate is to so many non-indigenous plants.

Both a blessing and a potential curse, cash crops represent, for this environmentalist at least, the lesser of two evils. While they encourage little bio-diversity, at least they look better than concrete monuments to Mammon, and help to reduce both the carbon footprint and improve air quality.

Regrettably, the signs suggest – both from above and at ground level – that we are taking one step forward and two steps back in the battle to preserve our bit of the planet and its natural heritage. But we must be vigilant, we must continue to encourage every small initiative that benefits the cause of Mother Nature. Both our seas and our landscapes are constantly being put at risk.

If you have a question or a garden that you would like featured, email me at: drpaccampbell@gmail.com. Further information about this gardening series and Patrick’s other work can be accessed at: patrickaccampbell.wordpress.com