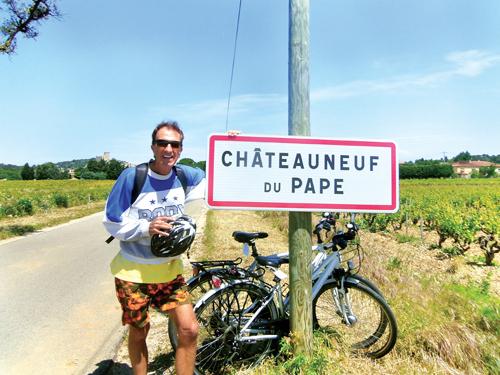 PHUKET: The delights of Soi Bangla in Phuket’s party town of Patong are of course a source of continual distraction, yet even the most hardened acolyte must occasionally take a break from the pleasures of the amber nectar and recharge his batteries in quieter, more bucolic locales.

So it was that I recently found myself on a cycling trip down the riverside paths and country lanes of Provence, from Avignon to Aigues Mortes in the Camargue.

On the first day, as I resolutely pedaled (my beret set at a rakish angle, a string of onions bouncing about my neck and an unlit Gauloise plastered to my lower lip) I fell into a reverie comparing cycling in Phuket and Provence.

On first inspection the comparison seems to have as much affinity as Paris Hilton and Albert Einstein, but after a lunchtime stop beside the ancient fountain in Chateauneuf -du-Pape and imbibing some of that famous town’s fine libations, certain parallels began to announce themselves.

Wind for example, is a constant bedfellow of the gadabout pedal-file, whether the monsoonal variety lashing off Nai Harn Beach, or this day’s ardent mistral blusters whistling untrammeled across the vineyards of Southern France and threatening to throw me unceremoniously beneath the wheels of passing trucks laden with ripe grapes en route to meet their crushing destiny, the same I would have met, if indeed that had eventuated.

I pedaled resolutely onwards, as the long distance cyclist must, and as evening fell, I reached my home for the night, a converted barge by the name of Estello, moored just south of Avignon, along side the banks of the Rhone. Here a second parallel asserted itself.

At ride’s end in Phuket, slaking one’s rampant thirst in out door roadside restaurants is a ritualistic reward for the endeavors of the ride. Often a game of Takraw will be starting among the locals as the first beer hisses into the iced glass.

In Provence, I found myself in a Cypress-shaded village square, seated at a local café and guzzling biere presse as villagers dusted off their boules for the evening’s game of Bocce.

Day two of my “French Revolutions” saw me gliding through the meadows alongside the Rhone southwards from Villeneuve-les-Avignon. The open fields were carpeted in sunflowers and poppies as though Van Gogh and Monet had themselves recently passed this way and painted the pyrotechnic panoramas.

Phuket is similarly blessed with intensely psychedelic blossoms such as Heliconia, Fangipani and Bougainvillea, which form the characteristic cycling backdrops in certain parts of the island.

I then cycled to the valley of the Gardon River where the Romans built a glorious three-tiered aqueduct known as the Pont du Gard in the first century AD. This World Heritage site is a stupendous feat of engineering which carries water over 50 kilometers to the city of Nimes and falls only 80 vertical centimeters in all that distance. It might be a stretch of the imagination to suggest that our own stupendous feat of engineering being constructed underneath Central Festival crossroads could turn into a (sub) aqueduct during the rainy season. But picnicking underneath the Pont du Gard I couldn’t help think that Ital-Thai could learn a great deal about engineering from the Romans.

Day three of my trip was through one of the most pristine landscapes of Provence, as I rode along rustic roads to the medieval village of Boulbon, nestled within the folds of the La Montagnette. Here I happened upon another similarity to Phuket as I came upon the boisterous weekly market.

Markets in Phuket and Provence are a part of the fabric of daily life, not only to buy fresh produce at the best prices, but as a social meeting points for the exchange of gossip; eating and drinking and for a large dose of sanuk.

The Boulbon market boasted a wonderful selection of local produce as well as handicrafts and artwork. On a little traffic island in the middle of the town, an accordion band was belting out their version of Roll out the Barrel and indeed the abundant outdoor cafés seemed to be doing exactly that as enthusiastic diners set about their liquid lunches.

As I rode on, I noticed that the icons and buildings of religious and superstitious belief permeate the landscape. In Provence the underpinnings of these artifacts are Judeo-Christian rather than Animist, Brahman and Buddhist as in Phuket, but the parallels are striking.

On day four I cycled through the magnificent Abbey of Saint-Michel-de-Frigolet then down to the 17th century castle of Barbentane at the confluence of the Rhone and Durance rivers from whence many crusades into North Africa were launched. In Phuket you might ride past Wat Chalong, or under the implacable gaze of the Big Buddha, where roadside spirit houses line the roadside, as do crucifixes in Provence. Clearly belief in the mystical realms remains a deeply ingrained part of both cultures.

My week ended cycling alongside the low-lying marshes and canals of the Camargue to the ancient walled city of Aigues Mortes and the Mediterranean. This region is famous for both its wild bulls and fabulous pink Flamingos which reminded me of the ubiquitous hump-backed buffaloes and cheeky mynahs that are a common backdrop to my Phuket rides.

However, the most striking parallel between the experience of cycling through Provence and Phuket, is the glorious feeling of traveling freely through the natural world – a part of the gloriously passing landscape, rather than being sealed off from it in a hurtling, polluting vehicle. As American writer William Saroyan said: “I love the bicycle, I always have. I can think of no sincere, decent human being, male or female, young or old, saintly or sinful, who can resist the bicycle.”

I’ll drink to that.

Sabah: Journey to the land below the wind