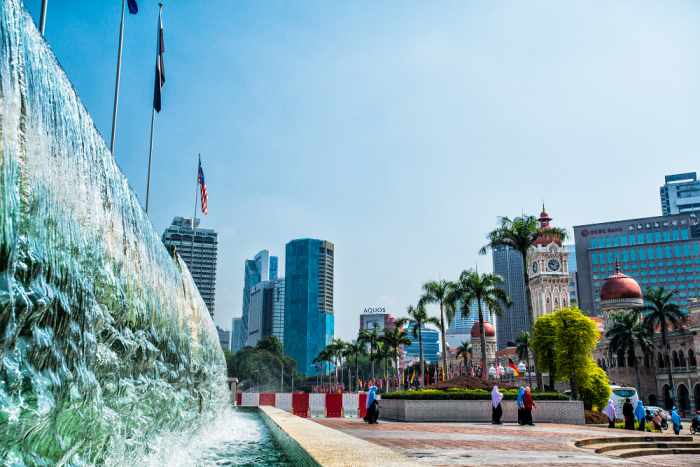 PHUKET: Malaysia’s bustling capital is certainly not a secret travel getaway, especially for expats residing in Phuket. The city once served as a major visa-run destination, but Kuala Lumpur (KL) may have dropped off the radar for many people when the Thai embassy there ceased issuing one-year visas. Nowadays, for many Phuket locals, KL is most often referenced when talking about a connecting flight.

Approaching the city by air, it is immediately obvious that oil palm is the country’s dominant agricultural endeavor. Endless hills and plains of the stout, dark-green trees sprawl to the horizon in every direction. Malaysia was the world’s leading producer of palm oil until 2006 when Indonesia took the lead. Still, in 2006, Malaysia yielded nearly 19 million tons of crude palm oil from more than 31 million rai (19,000 square miles) of land. This is possible with thanks in part to the 2,000 to 2,500 millimeters of rainfall received annually.

With the all of tropical Malaysia located between two and seven degrees north of the equator, the moist heat is palpable and as a result, outdoor activities in midday are best avoided.

KL, as well as the rest of the country, is predominantly Islamic, but many other religions are practiced. Islamic culture is woven densely into the fabric of the city which is immediately apparent by the unmistakable outline of mosques silhouetted on the skyline.

The ornate interior of the Putra Mosque can accommodate 15,000 people. Photo: Jeremie Schatz

When not closed during times of prayer, many of these sacred places of worship leave their gates open for visitors to explore. Serving as the primary mosque of Putrajaya, the Putra Mosque is a striking structure with nine pink domes, neighboring the prime minister’s office, with sweeping views of the city and Putrajaya lake. The enormous building can accommodate 15,000 worshippers and also boasts one of the tallest minarets in the region at 116 meters. The cavernous halls feature detailed carvings, stained glass windows and intricately painted domes.

In the heart of the city is Merdeka Square, a sprawling open-space with lovely fountains and surrounded by clashing architecture from KL’s distant past and current trends. Living walls (foliage grown on a vertical surface) surround the square and romantic horse drawn buggy rides are available. In late day, the square becomes lively and bustles with locals.

Bordering Merdeka Square is the Kuala Lumpur City Gallery which certainly warrants a visit. Entry to the gallery is free and features an informative journey through KL’s history, including Malaysia’s independence from the British. A gallery and exhibition are in the back, which displays work from local artists. Don’t miss the 185 square meter wooden model of the city which has an impressive light show leading a virtual tour of the city.

The road heading east from Merdeka Square and the KL City Gallery leads to the Klang River where the view north from the bridge gives a peek of the Masjid Jamek Mosque at the confluence of the Klang and Gombak rivers.

The bazaar offers a wide selection of goods which are surprisingly high in quality and showcase exquisite craftsmanship. Photo: Jeremie Schatz

Continue over the bridge and to the east another block and prepare to wander aimlessly around the Pasar Seni, also referred to as Central Market. The market is a treasure chest of quality handicrafts, textiles, local art and much more, all of which reflect the traditions of the local Malay as well as those from the many ethnic tribal groups of Malaysian Borneo. The bazaar offers a wide selection of goods which are surprisingly high in quality and showcase exquisite craftsmanship.

Only an amateur traveller would not weigh in heavily on the importance of the culinary experience when visiting a foreign land. When visiting exotic cities, it is best to “live to eat” rather than “eat to live”. Food should always be a destination in and of itself and not just a stop along the way. The diverse cultures that have melted together in KL over the centuries have contributed greatly to the country’s many and varied regional cuisines.

For instance, the quintessential national dish nasi lemak – rice cooked in coconut milk with ginger, anise and cinnamon served with fried anchovies, poached eggs, sambal gravy, cucumber and a thick beef rendang curry – is a single plate of food with an unbelievably rich spectrum of flavors.

Roti canai is another signature dish found on breakfast tables across the city. Roti, which can be described as the Muslim version of a crepe, is pounded flat and skillfully flung into the air until thin and then finds itself being fried to perfection on a grill. It is most often seen served with chicken curries and mild lentils. The culinarily-curious will revel in delight at the variety of Chinese, Indian and other Malay delicacies.

What’s been described thus far barely scratches the surface of what KL has to offer. There are a plethora of bazaars, walking streets, food lined boulevards, nightclubs as well as historical and impressive modern architecture such as the twin Petronas Towers to explore. Just outside of the city can be found the Sepang International Circuit where Formula 1 and MotoGP races are often held, the Batu Caves, bird-watching tours and a host of volunteer tourism opportunities.