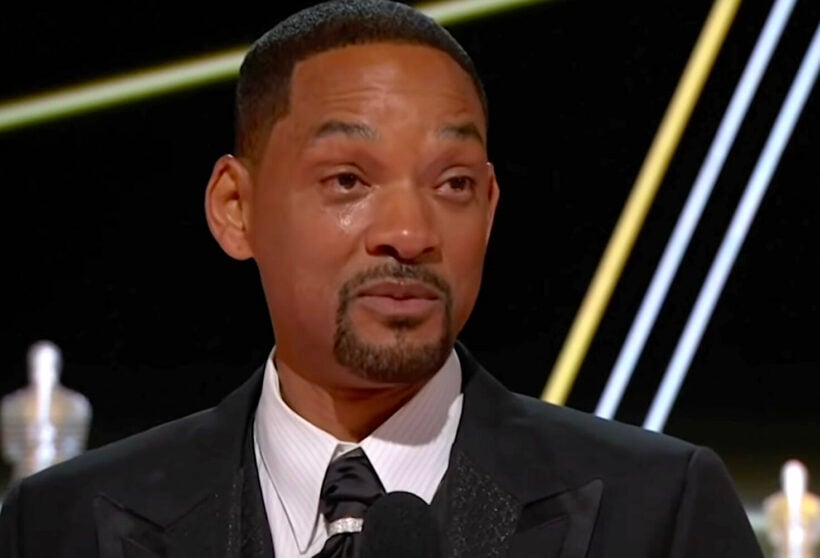 Will Smith shed tears during his acceptance speech for Best Actor at the Academy Awards, saying: "Love will make you do crazy things." Credit: The Telegraph | YouTube

It will forever be remembered as the night Will Smith slapped Chris Rock on stage in front of a live TV audience. Not for the prestigious award he won moments later, celebrating an illustrious 30 year acting career.

The unscripted incident happened at the 94th Academy Awards in Los Angeles on Sunday night — Hollywood’s most prestigious awards ceremony — which was hosted by comedian Chris Rock.

Smith slapped Rock and verbally assaulted him, after he cracked a tasteless joke about the shaved head of Smith’s wife, Jada Pinkett Smith.

Rock’s joke, which came mid-ceremony, was a reference to the 1997 film, in which lead actress Demi Moore shaves her head.

In December, Jada revealed to Billboard that she suffers from autoimmune disorder alopecia, which causes hair loss.

After hearing the insensitive joke targeting his wife, Smith was seen laughing it off, but Jada’s face was noticeably upset as she rolled her eyes. That’s when Smith snapped — and the evening’s proceedings went off script and things got ugly.

Smith suddenly got on stage and walked directly up to Rock then slapped him on the face, before turning around and returning to his seat.

Standing in the spotlight post-smack, Rock was visibly stunned. But he took the counterattack like a champ. He even manage to crack another joke, saying, “Oh, wow. Wow. Will Smith just smacked the s*** out of me,” as the audience laughed uneasily, wondering whether it was a skit. “That was the greatest night in the history of in television.”

Everyone quickly realised it was NOT a skit, when an enraged Smith shouted at Rock to “Keep my wife’s name out of your f**king mouth.”

The whole scene was shamelessly captured on live television, with closeups of the actor angrily dropping the unfiltered F-bomb.

Tragically, Smith’s moment of folly overshadowed his moment of glory, when a few minutes later it was announced that he had won the award for Best Actor — for his portrayal of Richard Williams in the biopic King Richard.

Richard is the father of tennis stars Venus and Serena Williams, who were also both in attendance.

“Jokes at my expense are a part of the job, but a joke about Jada’s medical condition was too much for me to bear and I reacted emotionally… I would like to publicly apologize to you, Chris. I was out of line and I was wrong. I am embarrassed and my actions were not indicative of the man I want to be. There is no place for violence in a world of love and kindness.” 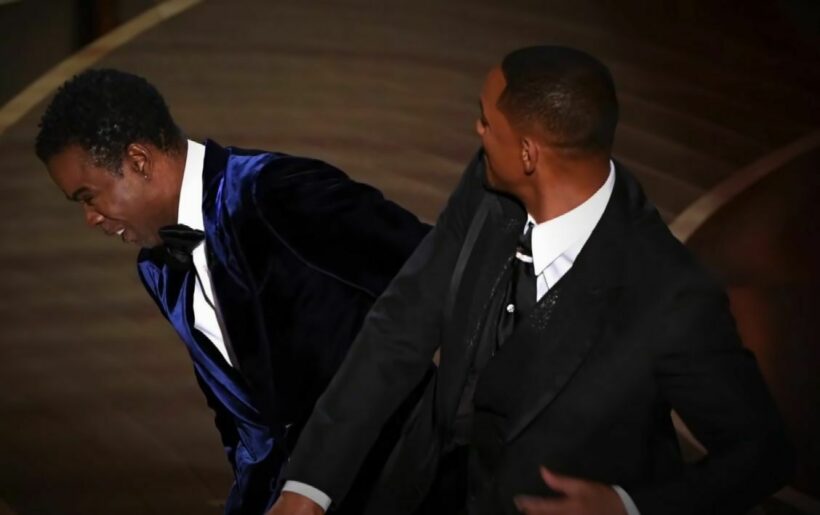 PHOTO: The Slap. Will Smith slaps Chris Rock on stage during the Academy Awards in LA. Credit: ET| YouTube

Following the ceremony, the Academy of Motion Picture Arts and Sciences tweeted…

“The Academy does not condone violence of any form.”

“Tonight we are delighted to celebrate our 94th Academy Awards winners, who deserve this moment of recognition from their peers and movie lovers around the world.”

Not the first time

Looking back, the Smiths may have had a beef with Rock since the last time he hosted the Academy Award in 2016. It was the of year of the #OscarsSoWhite scandal, which saw Jada boycott the ceremony.

That night, Rock cracked jokes about the Smiths in his opening dialogue:

“Jada got mad, said she’s not coming. Jada boycotting the Oscars is like me boycotting Rihanna’s panties. I wasn’t invited!”

“This year at the Oscars, things are going to be a little different. In the ‘in memoriam’ package it’s just going to be black people who were shot by the cops on their way to the movies.”

This year, Rock, 57, singled out Jada again. But with both Mr. and Mrs. Smith in attendance, the iconic comedian wasn’t expecting a literal punchline.

In his acceptance speech, Smith, 53, broke down in tears explaining his state of mind. He also apologized to his fellow nominees and the Academy.

Notably, he did not apologize to Chris Rock.

Read his FULL acceptance speech below…

Richard Williams was a fierce defender of his family. In this time in my life, in this moment, I am overwhelmed by what God is calling on me to do and be in this world. Making this film, I got to protect Aunjanue Ellis, who is one of the most, the strongest, most delicate people I’ve ever met. I got to protect Saniyya and Demi, the two actresses that played Venus and Serena.

Denzel [Washington] said to me a few minutes ago, he said, “At your highest moment be careful, that’s when the devil comes for you.” It’s like I wanna be a vessel for love. I wanna say thank you to Venus and Serena… and the entire Williams family for entrusting me with your story. That’s what I want to do. I want to be an ambassador for that kind of love and care and concern.

This is a beautiful moment, and I’m not crying for winning an award. It’s not about winning an award for me. It’s about being able to shine light on all of the people, Tim and Trevor and Zach and Saniyya and Demi and Aunjanue the entire cast and crew of King Richard and Venus and Serena and the entire Williams family.

To my mother, a lot of this moment is really complicated for me, but to my mother, she didn’t want to come out, she had her knitting friends, she has a knitting crew that she’s in Philly to watch it with. Being able to love and care for my mother, my family, my wife… I’m taking up too much time…

ThaiFoodGuy
12 minutes ago, Marc26 said: You peole are off your rockers Can you please point out where the lies are? So I can correct myself?

KaptainRob
Thread has been locked due to a members continued posting against Moderator instruction, misleading posts in relation to same, plus posting of an offensive meme - Alex is now enjoying a holiday and the thread remains locked to avoid further…

UPDATE: Will Smith apologises for Oscars outburst, after Academy rebuke