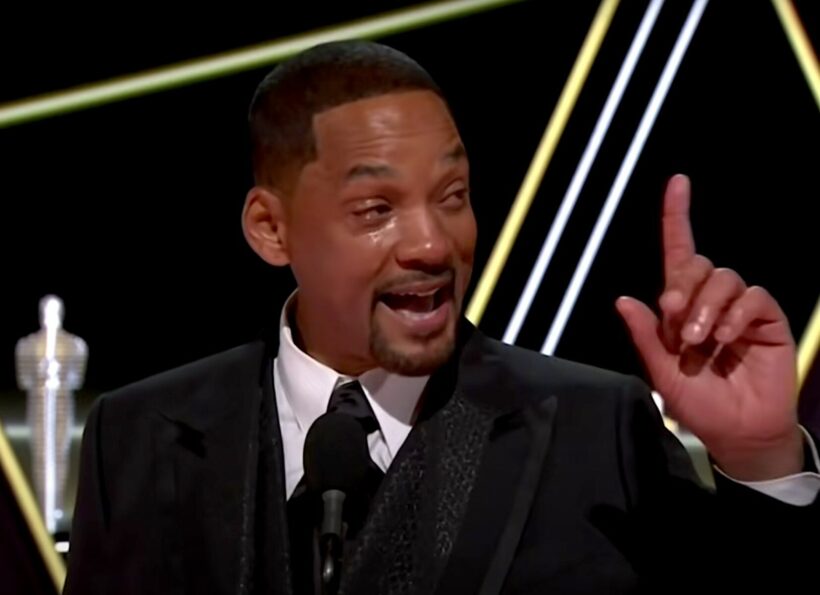 Will Smith apologises to the Academy during his acceptance speech at the Dolby Theatre on Sunday night in LA. Credit: The Telegraph | YouTube

While fans in Asia were going to bed, Will Smith was waking up in Hollywood — to a world full of controversy and condemnation. The 53 year old actor slapped comedian Chris Rock on stage at the 94th Academy Awards on Sunday night, then won his first Oscar.

The assault occurred in response to Rock cracking an insensitive joke about Jada Pinkett Smith’s hair. What he might not have known is that Smith’s wife suffers from alopecia, a disease that causes hair loss. Needless to say, the Smiths didn’t think it was funny, even if Will was seen laughing it off. His wife was offended, and he swiftly took matters into his own hands, literally, walking up on stage and slapping the comedian in the face, then shouting profanity at him from his seat.

The cameras were rolling. Children were in the audience. Smith dropped the F-bomb. Twice.

His son Jalen tweeted: “That’s How We Do It.”

Then just moments after his slap and verbal assault, Smith won the award for Best Actor for his role as Richard Williams in the biopic King Richard. The audience squirmed awkwardly in the chairs, while a tearful Smith attempted to justify his public assault as a defender of family.

In his acceptance speech, Smith tried to justify his aggressive actions moments earlier as coming from a desire to protect his family from the industry’s attacks. Then he blamed the devil. He apologised to the Academy, to his fellow nominees, to the audience — but not to Rock.

Finally, the next morning, a sober Smith blamed himself. He also apologised to Rock. On his Instagram account with 61 million followers, the controversial actor issued this public apology…

Violence in all of its forms is poisonous and destructive. My behavior at last night’s Academy Awards was unacceptable and inexcusable. Jokes at my expense are a part of the job, but a joke about Jada’s medical condition was too much for me to bear and I reacted emotionally.

I would like to publicly apologize to you, Chris. I was out of line and I was wrong. I am embarrassed and my actions were not indicative of the man I want to be. There is no place for violence in a world of love and kindness.

I am a work in progress.

The fallout of his slap and unfiltered verbal abuse on live television are forthcoming. On Monday, the Academy’s board of governors held an emergency phone call to discuss Smith’s incident. Shortly afterward, they issued a statement saying:

The Academy condemns the actions of Mr. Smith at last night’s show. We have officially started a formal review around the incident and will explore further action and consequences in accordance with our Bylaws, Standards of Conduct and California law.”

But that’s surely not the end of it. The Academy will meet on Wednesday evening in LA. Front and centre will be a discussion about Will’s actions and what the resulting repercussions should be, according to The Hollywood Reporter.

The board usually holds a post-Oscars meeting to review any issues that arose during the ceremony. But not this soon. Whatever they decide, Smith will likely get to keep his shiny new trophy on his shelf — even if it’s the only one he ever gets.

A slap on the wrist?

Pundits say the Academy is likely to sanction the actor with a temporary membership suspension. But it’s unlikely that his award for Best Actor will be revoked, following the tradition of awarding industry professionals for their work, not their lives (i.e. Roman Polanski and Harvey Weinstein).

Speaking on The View on Monday, actress Whoopi Goldberg, who is a board member and former host, as well as an Oscar winner herself, said:

“We’re not going to take that Oscar from him. There will be consequences, I’m sure, but I don’t think that’s what they’ll do.”

Either way, this much is certain: Smith’s moment of folly has overshadowed his moment of glory, and now he regrets that. But how will it taint his legacy?